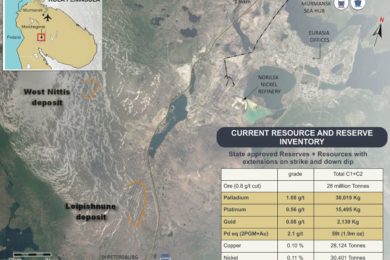 Eurasia Mining says it has signed an engineering, procurement and construction (EPC) contract, with an associated mine finance package, for its Monchetundra PGM-gold-copper-nickel project, in Russia.

The contract with China’s Sinosteel follows ongoing discussions between the two parties, which have been taking place since issue of the mining permit for a circa-2 Moz (two platinum group metals and gold) deposit in November 2018.

Monchetundra has 1.9 Moz of palladium-led reserves and resources with platinum, gold, copper and nickel.

Sinosteel said: “We are delighted that Terskaya Mining Company, controlled by Eurasia Mining plc, has received the final mining permit for the Monchetundra project. We look forward to working with CKE (Central Kola Expedition – a contractor), TGK (Terskaya Gornaya Kompany) and Eurasia, to commence the EPC and develop the mine and plant at this exciting palladium, platinum, copper and nickel project.”

Christian Schaffalitzky, Chairman at Eurasia, said: “We are delighted to advance the Monchetundra project. The details include not only the engineering components, but also the financing and legal documentation. We will be busy over the coming months developing our plans with Sinosteel for the mine’s start up and expected move towards production.

CKE, Eurasia’s long standing working partner at Monchetundra, were recently awarded and have now commenced work on a detailed project report, required to be submitted and approved within one year of the issue of the mining permit. This contract was awarded to CKE by Eurasia’s subsidiary TGK.

Eurasia said: “The report will include an outline of the further geotechnical, hydrogeological, metallurgical and resource and reserve base work required as part of the broader mine development plan. The report is a statutory requirement and is on track to be completed and approved.”

The ground works and other studies detailed within the report will then contribute to a more detailed feasibility study of permanent conditions and a revised reserves statement made on the basis of the existing feasibility study and the reserves report already approved by the state.

“It is Eurasia’s intention to fast track the above and to run them in parallel with further mine studies and programmes as outlined in the EPC contract with Sinosteel,” the company said.

The Sinosteel EPC financing covers 85% (or $149.6 million) of a total contract value of $176 million. A $50 million sub-contract is specified within the contract and is assigned to Eurasia’s 80% subsidiary TGK, or a sub-contractor of its choosing, for engineering and pit development works in advance of mining.