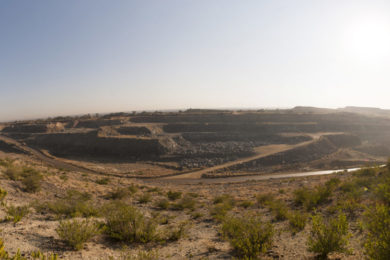 At completion, the unit, supplied by UniEnergy Technologies, will have a peak output of 450 kWh.

The VRFB battery commissioning with Eskom recommenced in November, with the unit passing a series of manufacturer and Eskom site acceptance tests during January and February.

Subsequent to this, the manufacturer recommended a set of upgrades to the VRFB, at its own cost. Bushveld said: “These are based on field experience from other operating sites gained in the time since the battery was originally ordered and they will further improve the reliability of the battery going forward. The upgrades are currently in progress.”

In addition to this, Bushveld Energy has initiated the development of a mini-grid project at the Vametco mining and processing facility (pictured), in South Africa. The new mini-grid will be able to deliver up to 1 MW of power to Vametco, the largest size permittable without a generation licence under current regulations, it said.

The mini-grid will consist of solar photovoltaic (PV) generation paired with a 1 MW/4 MWh VRFB and will feed electricity directly into the internal distribution network of the mine. “The project is structured on an unsubsidised, commercial basis with project finance, showcasing the commercial viability of both renewable energy and energy storage technologies,” the company said.

Among a number of benefits to the mine, were:

While the mini-grid will supply, at most, 8% of the mine’s energy consumption at any one time, “the project will demonstrate the technical and commercial capability of hybrid mini-grids using solar PV and VRFB technology, which is unmatched in its ability to deliver long-duration storage and cycle multiple times per day”, Bushveld said.

“The project could be scaled up further to provide a larger amount of energy in future. It could also be replicated at other grid-connected sites. The design can also be used at off-grid sites to replace more expensive and less environmentally friendly thermal generation.”

Similar to the structure of the projects covering the electrolyte production facility and the Eskom VRFB, Bushveld Energy said it would continue using its cooperation model in developing and delivering this project.

On top of these two developments, Bushveld said it made headway in the December quarter on the process to convert Bushveld-mined vanadium into electrolyte and design the production facility.

After promising pilot results at laboratory scale, Bushveld Energy procured two tonnes of vanadium for conversion into vanadium electrolyte, it said, adding that the scaled-up conversion process was currently being executed.

If proven successful, samples from the produced electrolyte will be provided to battery companies for suitability assessment, according to the company.

“There is significant expressed interest from VRFB manufacturers for vanadium electrolyte and appetite to add long duration energy storage to power systems and renewable energy projects in Africa overall.

“This suggests that there is sufficient market demand for vanadium electrolyte to support the installation of a 200 MWh capacity facility in South Africa,” Bushveld said. “The electrolyte production facility is being co-developed by Bushveld Energy and the IDC.”