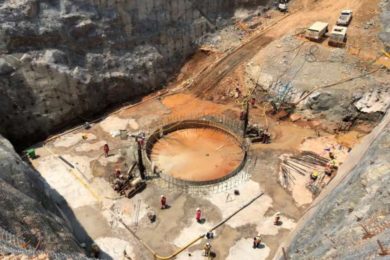 In a review of exploration and development activities in 2018, Ivanhoe Mines has gone into some detail on developments at Shaft 2 at the Platreef PGM-nickel-copper-gold project on the northern limb of South Africa’s Bushveld Complex.

This follows a project update issued just after the Mining Indaba event in February.

Shaft 1, expected to reach its final depth of 982 m below surface in early 2020, will ultimately become the primary ventilation shaft during the project’s initial 4 Mt/y production case, but Shaft 2, around 100 m northeast of Shaft 1, will provide primary access to the mining zones.

Ivanhoe said Shaft 2 will have an internal diameter of 10 m, will be lined with concrete and sunk to a planned, final depth of more than 1,104 m below surface.

It will be equipped with two 40-t rock-hoisting skips capable of hoisting a total of 6 Mt/y of ore – the single largest hoisting capacity at any mine in Africa. The headgear for the permanent hoisting facility was designed by South Africa-based Murray & Roberts Cementation.

Ivanhoe said nine blasts were successfully completed in 2018 enabling the excavation of Shaft 2’s box cut to a depth of approximately 29 m below surface and the construction of the concrete hitch (shaft collar foundation) for the 103-m-tall concrete headgear (preparations pictured here) that will house the shaft’s permanent hoisting facilities and support the shaft collar.

Excavation of the box cut and construction of the hitch foundation is expected to be completed in the June quarter, enabling the beginning of the pre-sink, that will extend 84 m below surface, it said.

In July 2017, Ivanhoe, which indirectly owns 64% of the Platreef project through its subsidiary, Ivanplats, issued an independent, definitive feasibility study (DFS) for Platreef covering the first phase of production at an initial mining rate of 4 Mt/y. The DFS estimated Platreef’s initial, average annual production rate would be 476,000 oz of platinum, palladium, rhodium and gold, plus 21 MIb (9,525 t) of nickel and 13 MIb (5,897 t) of copper.