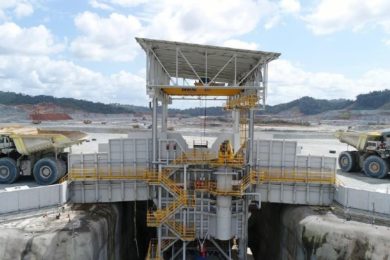 First Quantum Minerals Ltd recently filed an updated technical report for its Cobre Panama project in Panama dated December 31, 2018. The technical report incorporates updates with respect to ramp-up and commissioning of the current operation and provides detail on the expansion of the project from 85 Mt/y to 100 Mt/y starting in 2023. The technical report also includes an updated production schedule and Mineral Resource and Reserve tables that reflect the inclusion of grade control drill hole data. The inclusion of new data has improved geological confidence for the Botija pit, but represents no overall material change to the Mineral Resources and Reserves previously disclosed.

The expanded throughput to 100 Mt/y involves the earlier development of the adjacent Colina pit, the addition of a 9th mill, an expanded mining equipment fleet, additional conveyors, an in-pit crusher and other infrastructure related to Colina access. The total cost of the 100 Mt/y expansion project is estimated to be approximately $327 million and is expected to increase average production levels to over 375,000 t of contained copper per year after year 5, when the processing will be at the 100 Mt/y throughput rate. This expansion significantly improves the overall project economics.

So far progress has been rapid. After commencing in 2015, the target for completion of the mining pre-strip at the Botija Pit was essentially achieved by the end of 2018. The starter pit boxcut had been developed,as had the excavation and formation of four in-pit primary crusher pockets. In-pit water management sumps had been excavated and equipped, and the pit was progressing towards the formation of mining terraces to suit the deployment of ultraclass primary mining equipment. The first large rope shovel was assembled and began operating in March 2018, followed by the first of the Liebherr T284 ultraclass haul trucks in November 2018. At the end of 2018, two Komatsu Mining P&H 4100XPC rope shovels and 16 Liebherr T 284 trucks were operating in the Botija Pit. An additional two 4100XPC rope shovels, three ultraclass Komatsu L-2350 wheel loaders and 14 further Liebherr T 284 ultraclass trucks will be progressively commissioned during 2019. In addition, an ongoing pioneering and intermediate scale of mining equipment, comprising diesel hydraulic excavators plus 100 t capacity trucks and 40 t capacity 6 x 6 trucks, continue to operate in the Botija Pit on pioneering works. The blasthole production drill fleet mainly consists Epiroc PV-271 and PV-351 Pit Viper models. In total, a fleet of up to 45 Liebherr T 284s, five Komatsu P&H 4100XPCs has been allowed for.

Trolley-assisted haulage is a concept that is being adopted during the early life of operations. The primary truck haulage fleet is being delivered “trolley-assist ready” (TA). Additional pit ramp width has been included in the detailed pit phase designs to allow for the physical placement of transformers and catenary wire poles. In places, these ramps could be extended onto the waste dumps.

Processing wise at the end of 2018, inching and lining of one of the three SAG mills and two of the ball mills was completed. Progress towards completion of other mechanical and structural works was well advanced, as was progress on storage tanks, piping works, electrical installations and instrumentation.

Mining is proceeding in a sequence from an initial starter pit at Botija, supplying pre-strip development waste for site infrastructure construction and ore for process plant commissioning. Production will subsequently be ramped up for full-scale ore processing, with the open pits expanded and deepened. Building upon the technologies developed at other FQM operations, the project features in-pit crushing and conveying (IPCC). Blasted ore will be hauled to IPCC installations strategically located within the open pits. These installations will be near surface at the outset, but will be moved deeper into the pits as mining proceeds over time. In-pit conveyors will be extended to suit and these will converge on surface at a central transfer station discharging to a permanent overland conveyor connecting to the plant site.The primary crushing circuit will comprise up to fivesemi-mobile, independent, gyratory crushers (3 x thyssenkrupp KB63 x 89 and 2 x thyssenkrupp KB 63 x 130) operating in open circuit. Each crusher will be positioned in-pit and remote from the plant area, and crushed ore will be transported to the plant by an overland conveyor.

The mine development approach for the open pits has changed from one which was based on phased pits and cutbacks towards an ultimate perimeter, to one which is now based on a terraced mining layout. This change comes about due to experience elsewhere at company operations, where the deployment and utilisation of ultra class mining equipment has beenimproved by operating on broad terraces. A terrace layout in the Cobre Panamá environment also provides an improved means of managing rainfall inundation of the pits. The Botija Pit will be mined first, followed by the Colina and Medio Pits. Mining in the Valle Grande and BABR Pits will commence towards the end of Colina mining. The Balboa Pit will be mined last.