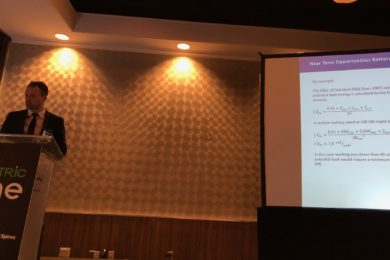 Kirkland Lake Gold is now carrying out more than 80% of its ore production from the Macassa gold mine in Ontario, Canada, with battery-electric machines, Andrew Schinkel, Senior Electrical Engineer, Macassa Mine Complex, told attendees at The Electric Mine conference in Toronto on Thursday.

The company placed its first battery-electric machine order in 2011, but now has 24 battery-powered LHDs and nine haul trucks (including four 40 t Artisan Vehicles Z40 machines, and Epiroc and RDH Scharf LHDs, among other machines), Schinkel said in a presentation titled, Powering up Macassa: operating a major battery-electric fleet at a deep underground mine.

The company’s learnings over the past eight years have been vast, but the main points Schinkel highlighted were trucks had slightly more availability than loaders, batteries can run down power quickly, the capital cost can be slightly higher than the diesel equivalent – but “it’s not about minimising costs, it’s about maximising value”, he said – and there is not as much equipment to choose from when compared with diesel machines.

Still, the company has made significant progress with these machines, he said. This includes increased reliability of machines, an increasing amount of purchasing options and improvements in the battery change-out process.