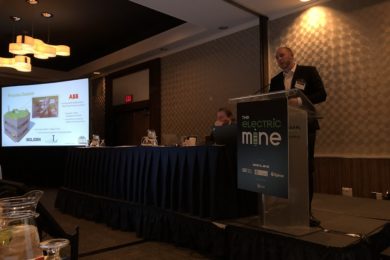 One of Epiroc’s second-generation battery-electric drill rigs is set to arrive at Agnico Eagle’s Kittilä gold mine in Finland in a matter of weeks, attendees at The Electric Mine conference in Toronto, Canada, heard on Friday.

According to Morgan Rody, Senior Project Manager: Sustainable Intelligent Mining Systems (SIMS), Global Strategic Projects and Alliances, Epiroc, the mine is due to receive the rig as part of the EU-backed SIMS research initiative.

SIMS is a three-year Horizon 2020-funded European-wide project aimed at demonstrating that the European mining industry and technology providers are global leaders with such sustainable and intelligent mining systems. Horizon 2020, meanwhile, is the biggest EU Research and Innovation programme ever.

The Epiroc battery-electric drill rig is scheduled to be followed over the next few months by the arrival of a second-generation Epiroc MT42 haul truck and a second generation LHD, he added.

Epiroc officially launched the second generation of its battery-electric vehicles at an event in Örebro, Sweden, last year. This came after its first-generation machines had clocked up over 60,000 hours of operations.