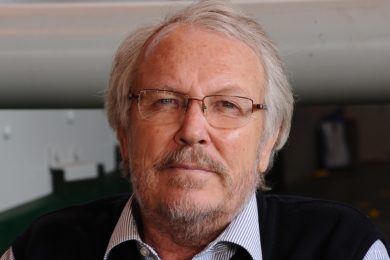 Engineer and self-made industrialist Gunter Vogel, founder and chairman of South African vibrating equipment manufacturer Kwatani, has passed away in Johannesburg after a long illness, the company confirmed. He was 75 years old.

Kwatani said: “Vogel was a well-known personality in the mining and manufacturing sectors, having acquired Joest South Africa, in 1988. It was then a small company importing motors from Germany for the assembly of small vibrating equipment. He built this modest business into a fully independent local original equipment manufacturer (OEM) which was rebranded as Kwatani in 2016. With its focus on ‘engineering for tonnage’, the business has become an industry leader in vibrating equipment solutions through South Africa and beyond.

“Born in Germany in 1944, he studied mechanical engineering before coming to South Africa as a young man in his early 20s. Colour-blindness had denied him a career as a pilot, but he pursued his engineering career with passion and ingenuity. According to his daughter Kim Schoepflin, Kwatani’s chief executive officer, he also loved mathematics and was convinced that everything had an engineering solution.

“Schoepflin said: “His success relied on this commitment to quality, technology and most of all his commitment to customers. He loved being on the mine site and was never shy to get his hands dirty working through the night to resolve whatever the problem was. He was so devoted that very often he would drive 12 hours through the night at the drop of a hat when the telephone rang.””

“She remembers him as a passionate teacher, giving interesting presentations on screen sizing that left a lasting impression on many customers in mining. “Even today, some of our competitors and suppliers use and refer to his sizing philosophies,” she noted.

“An enthusiastic reader and philosopher, Vogel also loved adventure and the African bush. Perhaps his most daring trip – together with his wife Maria – was by Landcruiser from Johannesburg to Hamburg, Germany. The 30,000 km trip took them seven months and traversed 29 countries on three continents.

“He was also a free thinker who opposed racial discrimination and devoted many years to supporting and building black businesses during apartheid. Significantly, Vogel laid the foundation for Kwatani’s transformation into a B-BBEE Level 1 company.

“Schoepflin said: “Being an exceptionally ethical man, he always fought for what he believed was right. He stood by his word and did not subject himself to any rules or regulations that he did not believe in. He remains a legend in the industry in which we operate.””