Cat’s R1700 LHD the first to get battery-electric treatment 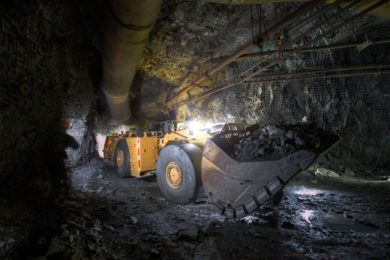 Following the development of a proof-of-concept battery-electric LHD in 2017, Caterpillar has confirmed at the Bauma fair that its first environmentally-friendly commercial machine will be a version of the recently released R1700 loader, the R1700 XE. The company hasn’t yet given a release date but has said the 15 t LHD will be the first in its line of battery-electric equipment. Robert Droogleever, Cat’s General Manager, Underground, said the company was targeting deep mines in Canada with the battery-electric R1700, but he also saw demand for the machine coming from countries such as Peru and Australia. The testing on the proof-of-concept R1300 took place at a Glencore underground mine in Sudbury, Canada, with the machine running in trials alongside the diesel equivalent.

Cat believes that battery-powered LHDs have the potential to significantly impact the economics of underground-mining and the viability of opening new mines. Benefits can include reducing ventilation infrastructure requirements and costs; generating less heat and dust that must be removed with additional air conditioning; and lowering the overall operating costs of the mine. “For a battery electric driven LHD to realise these types of benefits, it must balance high production capability with extended run times between battery charges. To this end, Caterpillar has chosen to make the new R1700 its first battery electric platform while using fast, onboard charging to facilitate high production levels. The new Cat® R1700 XE will be well positioned and engineered to accomplish these critical design parameters.”

The Cat R1700 was introduced in 2018 as a ground up redesign providing customers with game-changing productivity improvements. These improvements primarily come from its efficient new electro-hydraulic system, which saves fuel and provides a 65% increase in lift force – leading to significantly improved digging performance in the pile. “The R1700 XE combines these new features with a Caterpillar-developed lithium-ion battery operating and charging system. “The company’s exclusive MEC-500 fast charging system allows rapid, on-board battery charging with little to no impact to existing electrical infrastructure. Our charging system eliminates both battery handling during recharging (with its potential safety hazards) and the necessity to maintain change-out battery inventories.”

In designing the R1700 XE, Caterpillar “is relying on a long history and wealth of experience in designing electrified machines and power generation components and solutions. These include over 350 patents spread across such products as the electric-drive D7E and D6 XE crawler dozers, 988K XE wheel loader, and 794 AC and 795F AC mining trucks. The R1700 XE program also uses components from the Cat Microgrid solution. For underground mining specifically, this electrification experience was backed up by the development of a proof-of-concept machine whereby Caterpillar converted a conventional mechanical Cat LHD into a battery-electric platform. Concurrent to this program was the testing of the new MEC 500 charging system – both of which saw substantial testing at Caterpillar’s Peoria Proving Grounds followed by weeks of operation and testing at a customer mine in Canada.”

Results were impressive, says Cat. “Compared with base-line numbers for a diesel-powered R1300, the battery-powered model exhibited more than a 10-fold decrease in total energy costs; nearly an 8-fold decrease in generated heat; significantly less noise at the operator’s ear; instant torque from the electric motors; reduced dust levels attributed to not having a conventional diesel-related radiator fan; and reduced tyre wear.”

Caterpillar has used the insight gained from its proof-of-concept testing to design the R1700 XE and the MEC 500 charging system as a safe, profitable and productive option for mines going to electric fleets.