Metso Truck Body hits the heights at Terrafame Sotkamo mine 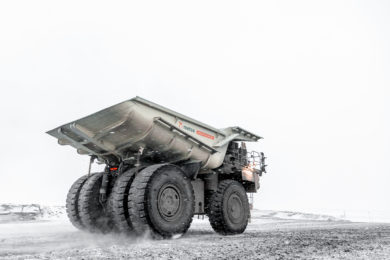 Metso may have only just released its new Metso Truck Body, but it has already proven its worth during tests at Terrafame’s multi-metal mine in Sotkamo, Finland.

The mine has been the first one in the world to test the Metso-designed, light-weight body, which can hold almost nine tonnes more payload, improving the efficiency of the mine’s hauling operations.

As an added benefit, the rubber lining of the body cuts the perceived noise in half during loading and significantly reduces vibration.

Metso officially launched the new truck body at the Bauma fair, in Munich, earlier this month.

Esa-Tapani Leinonen, Head of Mining Department at the Terrafame Sotkamo mine, said: “The experience we’ve had during the first few months of testing the body is positive. The capacity and the durability of the body match Metso’s promises. Higher payload and driver comfort are both top priorities for us. The feedback from the drivers has been very positive.

“Metso seems to have done a great job in designing this light-weight body. Despite the higher, 325-t total load, the elevated rear flange manages to keep the boulders on-board without problems,” he continued.

The rubber-lined, light-weight body was installed on Terrafame’s oldest haul truck, a Hitachi EH3500, in December 2018. Prior to installation, the truck already had an impressive track record of 50,000 hours of operation, according to Metso. The new body hauled its first loads from the Kuusilampi open pit just before Christmas.

The mine’s truck fleet is in operation 24/7. Currently, the ore is loaded from the 60-m-deep pit on to the trucks with a Caterpillar 910 Series excavator. One truck drives approximately 40 rounds in a day, equivalent to around 6,500 t of payload.

Timo Sarvijärvi, Head of Mining Sales, Metso Finland, said: “A light weight without compromising durability was our driver in designing the Metso Truck Body. During the test period, we are keeping track of the hauled tonnage and collecting driver feedback.

“In addition to the higher payload, the body is lighter to carry when empty, which further increases cost efficiency. Moreover, we have recorded a reduction of around 10 dB in the noise level on a rubber-lined standard body, which means that rubber is 50% quieter compared to steel. We expect at least a similar reduction in the Terrafame trial.”

Kristiina Karjalainen, Haul Truck Driver at the Sotkamo mine, was among the first drivers to have tested the new Metso Truck Body. She said: “The new rubber-lined truck body has indeed cut noise significantly. Now the loading sounds I hear in my cabin resemble more of a whiz than a loud rumble. There’s been a noticeable reduction in vibration as well.”

According to Karjalainen, the first 40-t bucket load has always been the hardest for the driver. After that, the rock bed smoothes out the noise.

“The side shields of the new light-weight body work as they should, too, protecting the side view mirrors from falling boulders. I would definitely like to see a rubber-lined body installed on truck number 10, the one that I usually drive,” she added.

The Terrafame Sotkamo multi-metal mine, which produces nickel, zinc, copper and cobalt, reached its intended production level during last year. Yet, there’s plenty of material left to haul, with the mine recently applying for a permit to process 18 Mt of ore and 45 Mt of overburden annually.

Esa-Tapani Leinonen said: “In 2021, the amount of overburden to excavate will double, as we proceed with the Kuusilampi pit expansion and remove the large layer of rock covering the orebody.

“Before that, we will have to rethink the responsibilities and the composition of both our own as well as our contractor’s hauling processes. As the amount of hauled material grows, maintaining cost efficiency throughout our truck operations becomes more and more important.”