Sandvik to automate and digitalise Codelco’s Chuquicamata underground mine 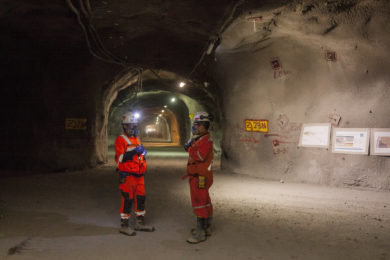 Sandvik says it will automate and digitalise Codelco’s underground copper operation at Chuquicamata, in Chile, creating one of the “most efficient and advanced underground mines in the world”.

Codelco is converting Chuquicamata from an open pit to underground mine as part of a 10-year strategic project to prolong its existing operations. It is due to start up in 2019.

Sandvik said: “The open system integrates manual operations and autonomous equipment into one powerful solution with AutoMine and OptiMine, enabling full transparency and real-time control over the parallel production and mine development activities.”

Andrés Avendaño, Operations Manager, Chuquicamata Underground, said: “Using our mines to full effect is part of our focus on sustainability and a key driver for our business. Automation and optimisation are critical to getting the most from our mines and keeping our people safe while we do it.”

Sandvik and Codelco started their automation journeys together with the first-ever AutoMine loading system installation at Codelco’s El Teniente copper mine, in 2004, Sandvik said.

Riku Pulli, Vice President, Automation, Sandvik Mining and Rock Technology, said: “Codelco has been an important partner for us from the beginning. It’s fantastic to continue the partnership as our visions are well aligned. We look forward to working with Codelco to deliver even smarter, safer, more productive mining through digitalisation.”

Codelco is the number one copper producer in the world and is owned by the Chile government. It controls about 19% of the world’s copper reserves and is also the second producer of molybdenum worldwide, with 24,000 t produced in 2018.

Sandvik’s digital solutions, including AutoMine, OptiMine and “My Sandvik” are working in hundreds of mines around the world.

The AutoMine product family allows customers to scale up automation at their own pace, covering all aspects of automation, from remote and autonomous operation of a single piece of equipment to multi-machine control and full-fleet automation using automatic mission and traffic control capabilities. AutoMine installations have logged more than 2.5 million hours with zero lost time injuries, according to the company.

OptiMine, meanwhile, is a suite of digital tools for analysing and optimising mining production and processes. It integrates all relevant data into one source, delivering both real-time and predictive insights to improve operations, Sandvik said. OptiMine is open and scalable, giving customers the flexibility to build at their own speed and incorporate other equipment, systems and networks.