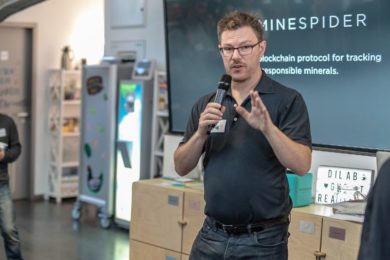 Beginning in April, Minespider says it is to partner with Volkswagen in an initial pilot focusing on tracking the carmaker’s lead supply, working with suppliers and sub-suppliers accounting for more than two-thirds of the group’s total lead starter battery requirements.

Volkswagen’s ultimate aim, according to the blockchain specialist, is to ensure all of its raw materials are sourced in a socially and environmentally sound manner.

“In the automotive sector, like in many other industries, supply chain transparency is a major issue, and to ensure sustainable mobility, responsible procurement is essential,” Minespider said. “Minespider and Volkswagen are working together to make procurement both more transparent and secure. Blockchain allows participants to trace the supply chain from the point of origin to the factory.”

Marco Philippi, Head of Strategy for Volkswagen Group Procurement, said sustainability in the supply chain is one of the company’s top priorities. “We see blockchain technology as part of the solution to ensure compliance with environmental and social standards along the entire supply chain,” he said.

Minespider is an open source, public blockchain protocol that offers stakeholders the opportunity to track the origin of their raw materials and present a complete chain of custody from certified mine to end manufacturer, according to the company. It was originally founded to address increasing global conflict mineral legislation, including the Dodd-Frank Act Section 1502 and the EU’s Conflict Minerals Regulation, which require companies to know who is supplying their gold, tin, tantalum, and tungsten.

“With industry interest turning toward increased transparency, the Minespider team are also launching initiatives into other key materials,” the company said. “The public protocol approach is a departure from previous supply chain tracking initiatives that used private, permissioned blockchains. This avoids the risk of a large player with a private blockchain creating a monopoly on the global mineral supply chain. By using a token-driven design, they provide the mechanism for decentralising protocol governance.”

Minespider’s Founder, Nathan Williams (pictured), said: “Ultimately, we would like to see an industry-wide transformation, a public protocol that any responsible supplier can join.”

Minespider’s protocol uses nested encryption to ensure a company’s data remains private on a public blockchain, it says. Digital “certificates” are created at certified mineral sources, such as mines or recyclers, which are then encrypted with the company’s public key and posted in a publicly accessible database.

As mineral shipments are sold, responsibility data of the new owner is added to the certificate which is re-encrypted with the public key of the new owner, creating a layered encryption like a “Russian doll”, Minespider says. “This ensures that only the owner is able to access the supply chain data, even though it is in a verifiable, immutable public data store, enabling supply chain transparency without sacrificing data security.”