Blast off at W Resources’ La Parrilla tungsten mine 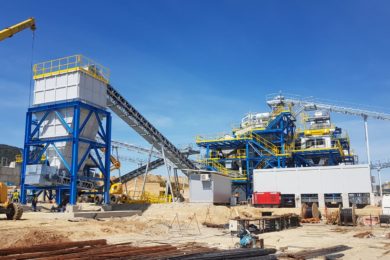 W Resources says the first T2 blast at the La Parrilla tungsten mine in Spain shot successfully on April 30.

The blast covered a mainly barren zone to prepare access to the 10 m benches closer to the run of mine pad and crusher plant in the Fast Track Mine area, the company said. This explosion continued to open up directly accessible ore to the mine operation.

Ore mined to-date at the operation, which is envisaged as a scalable project, starting at 2 Mt/y to produce some 2,700 t/y of tungsten concentrate and 500 t/y of tin concentrate, before an expansion to 3.5 Mt/y and beyond, has been free-dig or from the early blast area, W said.

“The immediate priority at La Parrilla is to complete the commissioning of the jig and mill plant, which is underway in parallel with the completion of the large-scale concentrator plant,” the company said.

Michael Masterman, Chairman of W Resources, said: “The first T2 mine blast at La Parrilla is a significant event for W Resources and kicks-off the commencement of hard rock mining operations.

“The explosive blast was completed successfully with the highest level of safety and supervision. The ore will be mined at low cost using a truck and shovel operation and transported via the newly constructed ramp to the new 350 t/h crusher plant where it will be crushed and then fed to the newly constructed jig and mill plant as part of the commissioning process.”

With a throughput of 350 t/h, the two alljig® jigs, provided by allmineral, are expected to provide grading, enrichment and cleaning of the pre-ground ore at La Parrilla.