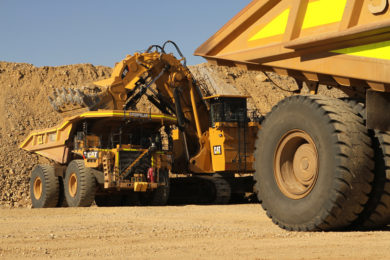 Rio Tinto and Caterpillar have agreed to work together to create an automated mine operation at the Koodaideri iron ore project, in Western Australia, that makes best use of data analytics and integration to enhance safety, optimise production, boost mining machine use and lower costs.

The recently signed agreement will see Cat® and dealer WesTrac supply and support mining machines, automation and enterprise technology systems for the new mine. Rio, in a separate release, said this would see the supply of a fleet of 20 autonomous 793F trucks (pictured) as well as four autonomous blast drills.

Beyond the autonomous fleet, Caterpillar will also provide loaders, dozers, graders, water carts and diggers for the operation, which will be Rio Tinto’s first Pilbara mine to be primarily operated using Caterpillar machinery, Rio said. “The two companies have also agreed to study the potential for increased levels of automation of heavy mining equipment at the mine in the future.”

The partnership with Caterpillar at Koodaideri will enhance Rio Tinto’s industry-leading Mine of the Future™ programme, which connects all components of the mining value chain for the first time, as well as making increased use of automation and digitisation, according to Rio. Caterpillar’s machinery will be integrated with Rio Tinto’s Mine Automation System (MAS), which collects and enhances data created by the company’s mining operations, to improve productivity across Rio Tinto’s entire iron ore network.

Rio Tinto Iron Ore Chief Executive, Chris Salisbury, said: “We’re pleased to be partnering with Caterpillar and WesTrac, the regional Cat dealer, to help make Koodaideri the most technology-enabled and innovative mine in our Pilbara iron ore network.

“Technology is rapidly changing our mining operations as we harness innovation to make our operations safer, smarter and more productive. This extension of our partnership with Caterpillar and WesTrac represents an exciting step for our business.”

“We are excited to work together to advance Rio Tinto’s mine automation and digitalisation program.”

Koodaideri will deliver a new production hub for Rio Tinto’s iron ore business in the Pilbara. Construction work has commenced, and first production is expected in late 2021. Once complete, the mine will have an annual capacity of 43 Mt, underpinning production of the Pilbara Blend, Rio’s flagship iron ore product.

As mine construction advances, WesTrac will manage logistics of mining machine delivery and commissioning and play a key role in implementing technology solutions.

Jarvas Croome, WesTrac CEO, said: “WesTrac is excited to be part of the Koodaideri project and to work with Caterpillar to deliver ground-breaking equipment solutions to support Rio Tinto’s Mine of the Future vision.”

Last week, FLSmidth announced it would bring the latest smart 3D design to Koodaideri after announcing a contract win.