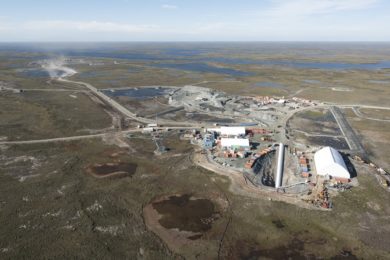 Agnico Eagle Mines says it has achieved commercial production at its Meliadine gold mine, in Nunavut, Canada, ahead of the original schedule and below initial guidance.

The company hit this mark on May 14, less than nine years after the company acquired the project and just over two years since the board of directors approved the mine’s construction.

Meliadine is Agnico Eagle’s largest gold deposit in terms of mineral resources, boasting 3.18 Moz of gold in the measured and indicated categories and 2.60 Moz in the inferred category.

Sean Boyd, Agnico Eagle’s Chief Executive Officer, said: “With Meliadine ramping up production over the balance of the year and Amaruq (also in Nunavut) on schedule to achieve commercial production in the third (September) quarter of 2019, the company is well positioned to achieve its gold production target of 1.75 Moz for 2019.”

The current mine plan at Meliadine outlines a phased approach to the development. The Phase 1 mill capacity is expected to be around 3,750 t/d, with ore being sourced entirely from underground accessed by two ramps. The mill capacity in Phase 2 is expected to increase to approximately 6,000 t/d, with ore being sourced from both the underground and open pits starting in year five.

Total project construction costs (after crediting pre-commercial gold sales) came in below the 2017 guidance of $900 million, according to Agnico, explaining that a further update on capital costs will be provided with the June quarter results.

Expected production at Meliadine for 2019 remains unchanged at approximately 230,000 oz of gold (including pre-commercial production) at total cash costs of $612/oz.