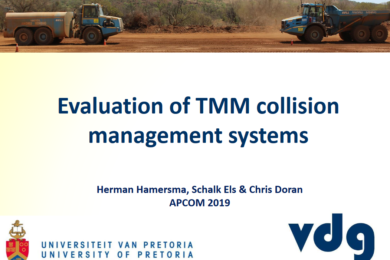 At the APCOM 2019 conference this week in Wroclaw, Poland, Dr Herman Hamersma from the University of Pretoria’s Vehicle Dynamics Group outlined how recent changes in Chapter 8 of the Mine Health and Safety Act in South Africa require employers at any mine to take reasonably practicable measures to ensure that persons (including pedestrians and machine operators) are prevented from being injured due to collisions between trackless mobile machines (TMMs) and between TMMs and pedestrians. According to the ICMM, 30-40% of mining industry fatalities are caused by mobile equipment and this is given as the reason in 14 (out of 88 total) of the fatalities recorded in South Africa during 2017.

This legislation has resulted in numerous suppliers of collision management systems (CMS or sometimes called Collision Avoidance Systems or CAS) entering the market, often with products that VDG argues are not sufficiently tested or developed to address the significant challenges associated with the practical implementation of such systems. As a result, a test methodology was developed by the VDG in consultation with the South African mining industry based on machine stopping performance. The test specifications are based on the Minerals Council of South Africa’s (MINCOSA) Mine Occupational Safety and Health (MOSH) Technical Specification Guideline.

There are both challenges and opportunities to introducing CMS solutions in mines. In some cases initially up to 30% decreases in production have been recorded and of course it requires significant capital and operational expenditure. There are also technical difficulties and there is often resistance to change. In some cases, safety has actually been reduced during implementation. But it generally leads to improved fleet management, full mining operator and pedestrian compliance with traffic rules, increased safety, fleet modernisation and increases in production.

The test methodology ties into the recommended technology development path contained within the MINCOSA MOSH Technical Specification Guideline and consists of several stage gates. The stage gates include lab-scale testing of the PDS supplier at a proving ground using test vehicles and tests of the whole CMS Solution on actual TMMs at pilot sites that are representative of the operating environment (referred to as single machine tests).

Hamersma presented the test methodology, describing the specific test configurations, testing equipment, success criteria and sample test results. Lab-scale tests are conducted on light vehicles at a vehicle proving ground, ensuring highly repeatable results with a sufficient margin of safety should the CMS solution not perform as expected. Along with the third party CMS itself the test used two light vehicles or TMMs with RacelogicVBOX 3i Dual Antenna RTK DGPS, a dSPACE MicroAutoBoxII embedded real-time computer as well as a brake pedal robot and controller.

The intention of the lab-scale test is to test the CMS solution in a simulated and controlled environment and against set criteria. An additional advantage of conducting the lab-scale evaluation tests on a proving ground is that access to TMMs that are used in production is not required, the space required for testing is considerably reduced, and the time taken to conduct the tests is reduced. The test methodology is, however, not restricted to light vehicles and proving ground tests and is easily extended to actual TMMs in representative environments.

The aim of the aim of the single machine tests is to test the complete CMS solution on a machine in a test environment to demonstrate the successful integration of the CMS solution with an OEM and the OEM interface. To date, 27 CMS tests have been conducted covering 12 different suppliers. Lessons learnt include that the test area must be appropriate for tests, including run-up and run-off areas. CMS trigger distances need to be known beforehand and speed control during testing is very important. Communication between drivers is of vital importance. Interestingly the expected system performance is often unknown to CMS suppliers who are also not mining experts, with limited knowledge of day-to-day mining operations. That said, reporting needs to be done for a non-technical audience.

Going forward, there are plans for global alignment in collision management goals through the ISO & ICMM (which has set a 2025 aim of making CMS available to all mining groups). The VDG plans separate testing of sensing and decision-making as well as on-site testing of underground CMS with new experimental equipment as well as multiple interactor tests and value adds to CMS (fleet management, fatigue monitoring, data analysis tools).