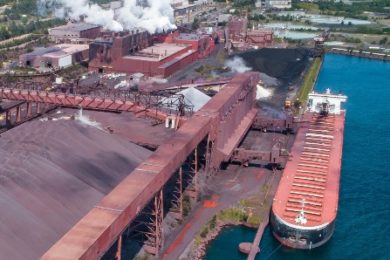 Cleveland-Cliffs says it will host a ribbon cutting ceremony for the expansion at its Northshore Mining subsidiary, in Silver Bay, Minnesota, US, on August 7, as the $100 million upgrade nears completion.

The company will be celebrating the startup of the new production equipment, including supporting infrastructure, which will be completed on schedule and within the total investment budget of $100 million, it said. Cleveland-Cliffs invested in upgrading the concentrator building, a new scavenger building, new conveyor systems, a limestone tank and a steam generating plant to support large-scale commercial production of DR-grade pellets.

The company broke ground on the project in March 2018, with the execution of the project concluding after nearly 300,000 labour hours of work, it said. Construction jobs created for the project included 150 people employed at peak construction, which included management, craft and labour.

“With the conclusion of the project, Northshore Mining will be the only US-based iron ore processing facility to produce low silica DR (direct reduction)-grade pellets,” the company said.

The Northshore operation will immediately start to produce DR-grade pellet feedstock for Cliffs’ hot briquetted iron Plant in Toledo, Ohio, a $830 million investment that will be commissioned in mid-2020, as well as DR-grade pellets to be exported to “a new clientele of DRI (direct reduced iron) producers outside the US”, it said.