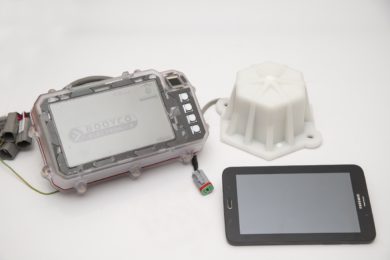 Booyco Electronics has added a vehicle detection system (VDS) to its existing proximity detection system portfolio, as it looks to increase safety in both open-pit and underground mining applications.

According to Booyco Electronics Engineer and Developer Frank Schommer, the Booyco VDS is applicable in both surface and underground environments.

The system can measure the distance between the vehicles in a range from 10 m up to 100 m, with a measuring accuracy of 1 m, according to Booyco. It can not only can determine the position of a vehicle but also the direction in which it is travelling, the company added.

Schommer said: “This means that the operator will be informed if another vehicle is close by, as well as the number of vehicles there are in the proximity. Based on a high frequency wave transmission, the new VDS technology has been developed to comply with the latest safety regulations for moving vehicles on mines.”

Booyco said: “While these high frequencies do not penetrate rock in underground mining environments like low frequencies can, they are able to perform the vital duty of detecting other vehicles at a greater distance.

“Like the pedestrian PDS, the Booyco VDS’s functionality is based on different ‘zones’ within the radio field around each vehicle that is created by a transmitter; the distance of each zone from the vehicle can be defined by the customer, depending on their actual conditions and specific vehicles on site.”

Schommer gave an example: “The system can be set so that it delivers a warning to the operators at a distance of 50 m. If no action is taken after that warning, and the distance between the vehicles is reduced, then a second zone is entered, and a command is generated for the operator to reduce speed. If speed is not reduced and the vehicles continue to get closer to each other, an intervention is triggered by the system to slow the vehicles down.”

The accuracy of the system ensures there is enough reaction time after warnings are given for the operator to act, reducing the possibility of a collision, according to Booyco.

While the system caters for larger vehicles with longer distances between them – such as surface mining load and haul operations – it is also applicable underground as it can measure long distances between machines through tunnels.

Booyco Electronics’ PDS system – based on very low frequency wave transmission – can, meanwhile, penetrate tunnel sidewalls underground, allowing the detection of pedestrians who are out of sight around a corner, but over shorter distances.

Schommer concluded: “It is therefore optimal to use the VDS and PDS systems together on the same vehicle to achieve higher levels of safety. Combining these technologies allows mines to improve safety between vehicles – where the distances to be measured are longer – as well as between vehicles and pedestrians – where it is important to detect workers who are closer but not visible to the operators.”