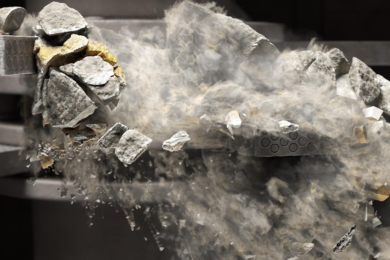 The improved breakage behaviour results in a drastically reduced energy consumption of only 3 to 13 kWh/t and very high degrees of particle liberation in the relatively coarse fraction of the product. On an industrial scale, Anglo American has already applied two customised VeRo Liberators® in its South African platinum operations and has ordered a third which is due to be shipped. All three are specially designed to be used in industrial‐scale pilot tests at their operations. Anglo refers to the approach as “shock-break technology” and has mentioned it in several investor presentation as well as showing graphics of the high-velocity comminution inside the VeRo machine.

Elsewhere, Penoles and Fresnillo in Mexico have carried out advanced test‐comminution of ores from several of their gold‐silver‐zinc‐lead mines in Mexico. All of the mentioned installations have been around the 100 t/h throughput level.

The 2019 MEI paper described results from test‐comminution by VeRo Liberator® of ores from Fresnillo’s Cienega mine, Durango Province, Mexico, in comparison to Cienega’s conventional comminution by SAG milling and ball milling. The results show that the VeRo Liberator® achieves a similarly high degree of particle liberation compared to the SAG mill, but at a drastically coarser particle size. This is achieved at significantly lower energy consumption and thus energy costs and allows for more efficient dewatering of comminuted waste material and, consequently, for potentially more stable slimes dams. The mechanical high‐velocity impact comminution by VeRo Liberator® hence overcomes the notorious problems of inefficient breakage in conventional ball and SAG mills.