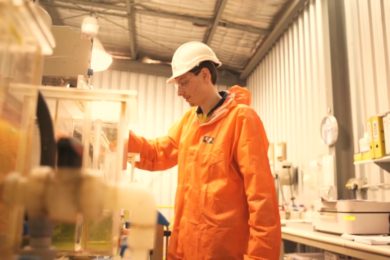 BHP says it has successfully completed its heap leach research and development trial in South Australia, confirming the viability of the technology to extract copper, uranium, gold and silver at Olympic Dam.

The program began in 2012 and was conducted at a purpose-built, small-scale heap leach facility at Wingfield run by Bureau Veritas, under direction from BHP and with support from the South Australia Government.

BHP’s General Manager of Olympic Dam’s Surface Processing, Chris Barnesby, made the announcement at the Copper to the World conference in Adelaide on June 18.

“The promising results from this trial supports our positive outlook for Olympic Dam, given forecast demand increases for copper and the optionality we are building for this world-scale resource,” he said.

“We safely and successfully produced 19 t of good quality copper, most of which went back into the smelter and off to customers, though we kept a little to ourselves to commemorate the achievement.”

Despite the success of the project, Barnesby said the deployment of such technology was a “matter for future consideration”, explaining that there were many factors involved in making this decision, including “passing through our Capital Allocation Framework”.

He concluded: “As it stands today, we have confirmed the viability of a technology with the potential to join our suite of growth options. However, our immediate focus is on operating safely and reliably, and setting a foundation to unlock more value for BHP and for South Australia over the long term.”

Heap leaching works by drip-feeding acid through a large stockpile (or heap) of ore to leach out metals. BHP uses heap leaching at its copper operations in Chile, however Olympic Dam’s polymetallic properties require a different approach, according to the miner.

BHP said: “The research and development program has the potential to benefit the mining industry more broadly in South Australia, as heap leaching has the potential to deliver lower capital and operating costs, increased scalability, reduced potable water use and the ability to process lower-grade ores.”

Separate to the trial, BHP continues to progress studies on the Brownfield Expansion project, or BFX, as part of Olympic Dam’s resource development strategy, which seeks to potentially increase production to between 240,000-3000,000 t/y of copper.