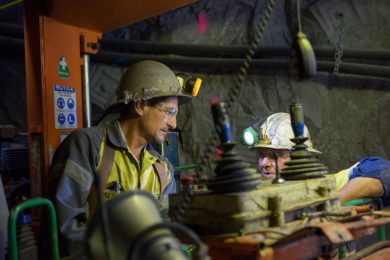 Macmahon Holdings in a widely expected move has announced it has executed a binding agreement to acquire 100% of GF Holdings (WA) Pty Ltd and its subsidiaries (collectively referred to as the GBF Underground Mining Group) (GBF).

The purchase price will comprise an upfront component reflecting an enterprise value of circa A$48 million, and two further earn-out payments which are subject to GBF achieving agreed performance hurdles in the next two financial years.

“The acquisition of GBF is consistent with Macmahon’s strategy of growing capability and scale in its underground division to capitalise on the significant level of underground opportunities that Macmahon is seeing with its current and potential clients.”

“GBF is a strategically compelling and financially attractive acquisition for Macmahon. With GBF we have the opportunity to achieve meaningful scale in our underground contracting business, which is a key pillar in our strategy of becoming a leading mining contractor that can service clients through the life cycle of their mining operations,” Finnegan said.
“There are also potential synergies to be realised as the two businesses are combined, but growth is the key driver of the transaction.”

“GBF’s brand and key personnel will be retained, with its capabilities and strong client relationships being fully integrated into Macmahon’s underground business, to maximise our ability to win new work.”

GBF’s founders, Michael Foulds and Ross Graham, will continue in the business with incentives to drive further earnings growth via performance based earn-out payments in FY20 and FY21.

Foulds said he and the management team at GBF were pleased to be partnering with Macmahon and looked forward to achieving the growth opportunities that would be available to the combined business.

“We are excited to join the Macmahon team and are confident this acquisition will create a strong group that will benefit our current clients and unlock new contract opportunities,” he said.