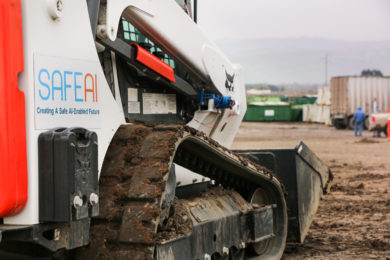 SafeAI has secured $5 million in funding to accelerate development of its autonomous vehicle platform for the mining and construction equipment industry. SafeAI is partnered with Doosan Bobcat and is already operating an autonomous Bobcat skid steer loader at their test site in San Jose, California. SafeAI says it is working closely with mining and construction customers to deploy a safety-first,robust, and flexible autonomous platform across entire fleets of vehicles.

Recent developments in AI have advanced the capability of autonomous vehicles to a level of sophistication and capability now commonly seen on roads and highways. “SafeAI is adapting these advances to meet the unique requirement of mining and construction sites. Large vehicle manufacturers have demonstrated that autonomy can improve safety, decrease costs, and increase productivity with early generation technology. Now, mining and construction customers require a technology that is designed for their needs.”

“Deploying artificial intelligence (AI) algorithms in safety critical applications is one of the biggest challenges of AI. SafeAI is deploying a patent pending safety architecture that combines the best practices of autonomy and the latest artificial intelligence (AI) algorithms to produce an innovative safety solution that ensures site-wide safety.”

SafeAI believes that it is uniquely positioned to provide safe autonomous solutions to the end customers in mining and construction. The team includes technologists from Caterpillar, Ford and Apple who have long history of taking autonomous and AI technology to production. Bibhrajit Halder, SafeAI’s CEO, believes the technology has reached a tipping point to introduce what he calls “Autonomy 2.0” to the mining & construction industry.

“Advances in machine perception and a sharp decline in hardware costs are now enabling autonomous mining and construction vehicles to deploy at scale. What took 10 years of R&D, we’ve completed in less than a year,” said Dr Halder. “Our team of experienced autonomous engineers are taking the latest technology from autonomous car projects and deploying them in the real world of mining and construction. These companies have already seen the benefits in safety and productivity and are eager to quickly deploy the next generation of Autonomy 2.0.”

“We see a long horizon to passenger car autonomy,” stated Andreev. “We also believe that the amazing advances in technology and talent from those companies will spill over to off-highway use cases where the ROI has already been proven. In construction and mining, we observed a fundamental shift from OEM-led proprietary autonomy to end customer-led autonomy that better serves their unique needs.”