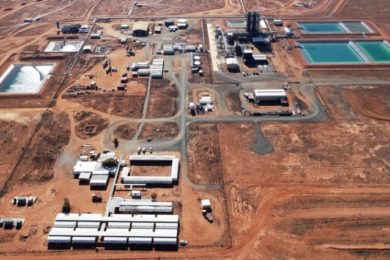 GRES will quickly ramp up the DFS work programs, due to the significant package of advanced technical work Boss has completed since it obtained the Honeymoon uranium project in South Australia from Uranium One (Australia) in December 2015 and, specifically, since the completion of the prefeasibility study in 2017, Boss said.

Honeymoon is a former-operating mine fully permitted to produce 3.2 MIb/y of uranium for export (one of only four mines in Australia). Based on previous studies, it is expected to require $58 million to ramp up output to 2 Mlb/y, according to Boss. It comes with a 63.3 MIb U3O8 JORC resource.

The DFS is due for completion in November 2019, according to Boss.

Boss Resources Managing Director, Duncan Craib, said: “GRES is a leading engineering and consultancy firm that has delivered multiple mining projects of significant size and scale, both domestically and overseas.”

The appointment continues Boss’ relationship with GRES, which completed the Honeymoon scoping study in September 2016 and the prefeasibility study in May 2017.

The scope for the DFS is based on two stages. Stage 1 includes re-commissioning of the existing SX facility and infrastructure including the various modifications required to improve performance, rectify problems identified during previous operations and make preparation for Stage 2 expansion.

The company said: “Boss will produce a combined DFS for the Stage 1 – Recommissioning, and Stage 2 – IX upgrade to achieve 2Mlb per annum U308. The DFS will improve on the work done in the prefeasibility study and deliver a Class 3 cost estimate with appropriate detail to achieve an accuracy of ±15%.”

The DFS will report on the design of the leach patterns for the wellfields and associated production scheduling based on these patterns and summarise the test work carried out to date, Boss added. It will also provide updated mineral resource and report on progress made against the updated permits.