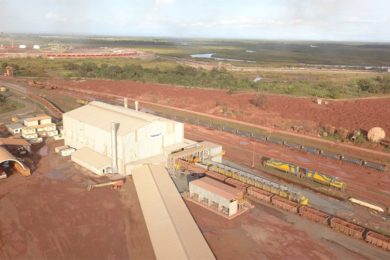 Tenova TAKRAF says a 48-hour performance test for bauxite-carrying trains at a major expansion project in Guinea was successfully completed on July 1.

During the 48-hour period, starting June 29 at 00:28 and ending on July 1 at 00:28, more than 1,560 wagons, equating to 12 individual complete trains, carrying bauxite were successfully unloaded.

Compagnie des Bauxites de Guinée (CBG)’s Bauxite Production Expansion project, in Kamsar, Guinea, aims to increase bauxite exports to 18.5 Mt/y. TAKRAF, in late 2016, was awarded an engineering, procurement and construction contract worth around €100 million ($112 million) for a greenfield railcar unloading and primary crushing station, as well as a secondary crushing station and a brownfield conveyor system, at the project. The railcar unloading system was designed in collaboration with Ashton Bulk, the company said.

TAKRAF sizers, one primary and two secondary, were are also included within the crushing stations at the project, the company noted.

The bauxite expansion project hit its first ore goal back in February.

Andreas Papst, Tenova TAKRAF Senior Project Manager, said: “I would like to personally thank all colleagues, including our partners on the client’s side, for their strong willingness to collaborate and solid discipline in the successful achievement of this important milestone. TAKRAF’s successful delivery of this important project is an important reference for us in and is a true testament of our ability to operate in complex environments, overcome challenges and deliver!”