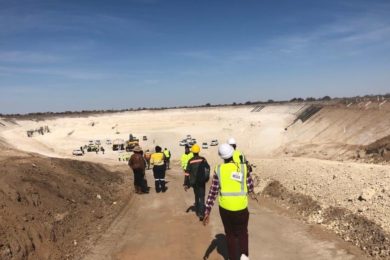 Ausdrill’s Barminco subsidiary is proceeding with mobilisation and readiness to commence execution of the Zone 5 underground mine at Cupric Canyon Capital’s Khoemacau copper-silver project in northwest Botswana, the Gaborone-based company said.

Following closing of a finance package for Khoemacau’s 3.6 Mt/y starter project, the contractor is now expected to start work on the underground mine in December. This is part of the five-year, US$560 million underground mining contract the two parties signed last month.

This starter project is expected to involve processing ore from a 91 Mt resource base at a head grade of 2% Cu and 21 g/t Ag. First copper concentrate output is scheduled for the first half of 2021, with annual production averaging 62,000 t of copper and 1.9 Moz of silver for over 20 years.

Cupric noted that early construction activities on the underground project had been taking place since the start of the year.

“There are now more than 700 people on site carrying out construction work including boxcuts for underground access, roads, a water pipeline and terraces for surface infrastructure,” the company said.

To date, some 7.8% of the project capital cost, or $31 million, has been spent on these activities, with around 57% of the costs committed, the company said on July 18.