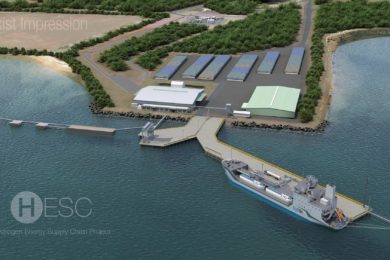 Construction has started on a A$500 million ($353 million) pilot project looking at the feasibility of turning brown coal from the Latrobe Valley, in Victoria, Australia, into hydrogen for liquefaction and export to Japan.

Works have begun on liquefaction facilities linked to the Hydrogen Energy Supply Chain (HESC) project at Port Hastings, Victoria, which the government says has the potential to create A$2 billion in exports for Australia.

On the other side of Australia, Fortescue Metals recently partnered with CSIRO on hydrogen technologies to support the development of new industries, create jobs and pave the way for low emissions export opportunities for the country.

Hydrogen production operations for the pilot phase of HSEC have been established at the AGL Loy Yang mine, with operations leveraging existing coal gasification technologies adapted specifically for Victorian brown coal. Hydrogen will then be transported to a liquefaction and loading terminal at the Port of Hastings Victoria, Australia.

“Once converted to liquid, hydrogen will be shipped to Japan using a world-first, innovative liquefied hydrogen carrier, purpose built for hydrogen transport,” the HESC said.

“Australia is well placed to become a global leader in hydrogen production and this pilot project is a crucial step towards making this vision a reality. The Australian and Victorian Governments have committed A$50 million each to the A$500 million project, which is also supported by the Japanese Government and Japanese industry,” he said.

“This project promises to be of huge benefit to both nations and particularly the state of Victoria, which has the opportunity to develop an alternative and value-adding use of its abundant brown coal reserves in the Latrobe Valley.

“The use of hydrogen is part of Japan’s vision of a clean energy future and any emissions from the pilot project will be fully offset, with commercial scale operations required to use carbon capture and storage to ensure a low emission source of hydrogen.”

Minister for Trade, Tourism and Investment, Simon Birmingham, said the project was the first of its kind in Australia and was built on the strong and long-standing trade partnership between Australia and Japan.

“This pilot project is the first step in creating a commercial scale hydrogen supply chain which could lead to billions of dollars in export earnings for Australia and help Japan meet its strategic energy targets for 2030 and beyond,” he said.

“As global demand for hydrogen continues to grow, strategic investments such as this one have the potential to turn Australia into a major global exporter of hydrogen, particularly to countries such as Japan and South Korea.

“Australia has long been a reliable supplier of energy needs and there is no doubt that we are uniquely placed to continue to meet those global needs by becoming a leader in hydrogen energy. Future commercial scale operations in the Latrobe Valley and around the country will help transform Australia into a hydrogen powerhouse, delivering significant economic benefits and thousands of extra jobs for Australians.”

For funding purposes, the pilot phase is split into different delivery portions – a Japanese funded portion and an Australia funded portion.

The Australia funded portion is coordinated by Hydrogen Engineering Australia (HEA), a consortium comprised of project partners including Kawasaki Heavy Industries (KHI), J-POWER, Iwatani Corporation, Marubeni Corporation and AGL. This portion involves refining the hydrogen gas in the Latrobe Valley, transporting it to the Port of Hastings, converting it to liquid and then loading it onto the marine carrier.

The Japan funded portion of the HESC pilot phase is coordinated by the CO2-Free Hydrogen Supply Chain Technology Association (HySTRA), acting on behalf of KHI, J-POWER, Iwatani Corporation and Shell. The Japanese funded portion includes converting brown coal to gas in the Latrobe Valley, transporting liquid hydrogen by sea and then unloading it in Japan.

The HSEC project will be developed in two phases: