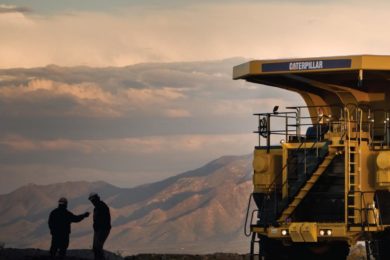 Caterpillar’s Resources Industries division continued to perform well in the June quarter of 2019, with the segment registering strong demand from, in particular, North America.

Following these results, Cat maintained its 2019 outlook for a record profit of $12.06-13.06/share, but said it was expecting the annual figure to come in at the lower end of this range.

Chairman and CEO, Jim Umpleby, said: “We have the right strategy in place to deliver long-term profitable growth through our continued focus on strategic investments, including growing services and expanding offerings.”

The highlight of these results was a record performance from Cat’s Construction Industries division, with the $6.47 billion of sales reflecting, according to Umpleby, the company’s “strong competitive position globally”.

While this was the headline from the quarterly results, the company’s Resources Industries division put in another good shift in the period.

Resource Industries’ total sales were $2.8 billion in the June quarter, a 11% year-on-year increase, with the jump primarily due to higher equipment demand and favourable price realisation, Cat said.

It was easy to see where, geographically, the boost came from. North America sales were up to $1.06 billion in the quarter, from $804 million a year earlier. Latin America and Asia/Pacific couldn’t match that 32% year-on-year rise, but still saw sales climb 14% higher to $448 million and $759 million, respectively. Year-on-year sales to Europe, the Middle East and Africa, meanwhile, came in 22% lower at $446 million.

Profit was also up in Resources Industries – at $481 million in the quarter compared with $411 million a year earlier. Favourable price realisation was again picked out by Cat as one of the reasons for the 17% year-on-year jump, in tandem with increased sales volume, which was partially offset by higher manufacturing costs.