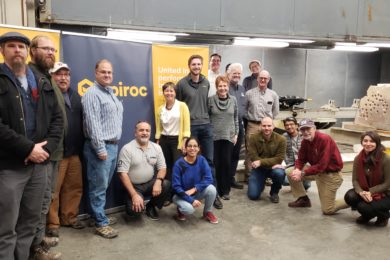 Epiroc says it has donated a COP 1238K rock drill to the Excavation Engineering and Earth Mechanics Institute (EMI) at the Colorado School of Mines in the US.

The COP 1238K hydraulic rock drill for tunnelling and drifting applications updates testing equipment at EMI, the largest independent rock drilling and excavation research facility in the world, according to Epiroc.

Located in Golden, Colorado, the Colorado School of Mines is known globally for its expertise in topics related to earth, energy and the environment. EMI was established in 1974 to enhance education and research in the field of excavation technology for mining and civil underground construction, and the institute has become one of the world’s leading research facilities.

Epiroc said: “Over its 45 years of existence, EMI has developed a suite of physical property tests, cutter and cutterhead evaluation procedures for performance prediction, project costing, and design of mechanical rock excavation tools for all types of mechanical excavators in mining, civil underground construction, and microtunneling.

“The developed test procedures and performance/cost prediction models have been validated with extensive field data from excavation and drilling projects around the world.”

The rock drill donation came about through collaboration between Shawn Cheney, Epiroc Business Line Manager – Rock Drilling Tools, and Jamal Rostami, Director of the Earth Mechanics Institute. A member of the EMI industrial advisory board, Cheney facilitated the donation of the COP 1238K to replace EMI’s decades-old testing drill, Epiroc said. The new test cell installation was completed in February 2019.

Cheney said: “Epiroc has tremendous appreciation for and confidence in the work that EMI does. We recently partnered with EMI on a project related to the cutting technology on our Mobile Miner. We’re honoured to donate equipment that will help EMI continue to serve as a valuable resource for the mining and civil underground construction industries.”

The COP 1238K is developed to maximise impact power while optimising durability in underground applications, according to Epiroc, with its sweet spot being hole diameters from 2-3½ in (51-89 mm). It has a power rating of 12 kW.

The rock drill features a built-in reflex damper that contributes to improved drill steel economy and reduces wear on the rock drill, feed and boom, according to Epiroc. “A powerful stepless variable and reversible rotation motor provides high torque and excellent speed control. In addition, a long, slender piston matched to the drill steel delivers optimal impact power without damaging the drill steel,” the company said.

Rostami said: “The COP 1238K rock drill donation gives EMI the opportunity to perform full-scale testing using the latest in rock drilling technology. This test unit will drive research that contributes to more efficient and safer drilling operations in the industries we support.”