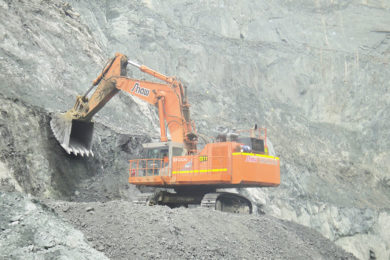 Venture Minerals’ plan to restart mining at the Riley iron ore project in Tasmania, Australia, is accelerating with the announcement that the ASX-listed company has awarded Shaw Contracting the preferred tenderer status for mining and processing works at the operation.

One of Tasmania’s most experienced civil and mining contractors, Shaw previously worked with Venture when it commenced mining the Riley iron ore deposit, in 2014. The company also carried out several major overburden and mining contracts for Savage River Mines (pictured) and Bluestone Mine in Tasmania.

The Riley project is on a granted mining lease, where reserves of 1.8 Mt at 57% Fe with low impurities have been outlined. Venture says around 90% of the equipment previously purchased for mining the orebody is still on hand and there is potential for producing a direct shipping ore product. The deposit is also all at surface, Venture says, and is less than 2 km from a sealed road that accesses existing rail and port facilities.

Venture has had the former operating mine on care and maintenance since August 2014 shortly after it suspended operations.

The company says it continues to work on updating the previous feasibility study at Riley so a decision to recommence mining can be made at the earliest opportunity. Following a favourable study outcome, its goal is to commence iron ore production in the December quarter of this year.

On the contract award to Shaw, Venture said: “In the awarding of preferred tenderer status to Shaw, Venture did receive strong interest from other service providers in relation to the mining and processing tender packages sought by the company. Venture is now well progressed in the process of collating this and other necessary information to form a robust view of potential project economics as it finalises the Decision to Mine study.”

The company has already undertaken extensive pre-production works at the Riley project to recommence operations, making the project a ‘quick to market’ opportunity for the company, it said.

Venture’s Managing Director, Andrew Radonjic, said: “Venture is glad to welcome back the experience and knowledge of Shaw Contracting to the Riley iron ore project. The advantages of getting Shaw to pick up from where they left off will be a huge advantage to the recommencement timeline of the mine.”