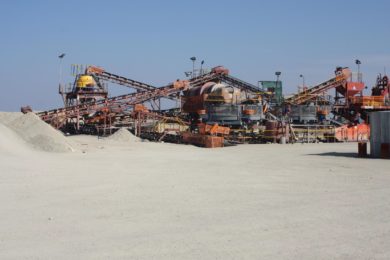 BlueRock Diamonds, the owner and operator of the Kareevlei diamond mine, in the Kimberley region of South Africa, has instructed Teichmann South Africa to provide mining services to the company.

BlueRock announced back on May 16 that it was in negotiations with a member of the Teichmann Group to provide the quantity of ore necessary to meet BlueRock’s production plans.

The diamond miner said Teichmann’s extensive experience in mining operations is expected to significantly de-risk the company’s mining activities and allow BlueRock to meet its production targets in a “cost-effective manner”.

The Kareevlei licence area covers 3,000 ha and hosts five known diamondiferous kimberlite pipes. As at November 2018, it was estimated that the remaining inferred resource from the four kimberlitic pipes (KV1, KV2, KV3 and KV5) represents a potential in-ground number of carats of 367,000, BlueRock says.

The contract is for a period of five years commencing with an effective start date of July 1 and includes the extraction of ore and waste, haulage of said material to a stockpile, breaking down ore to the required size when required, and delivering ore to the processing plant.

BlueRock said: “Unlike the agreement with the previous provider of these services which was paid on an hourly basis with a minimum number of hours guaranteed, Teichmann will be paid almost entirely on a cost per tonne basis and, accordingly, the effective cost per tonne is reduced with the planned increased production.”

Based on the lower end of the company’s current production expectations, the estimated cost of Teichmann’s services for the 12 months ending June 30, 2020 will be around ZAR21 million ($1.4 million).

Mike Houston, Executive Chairman, said: “The upgrading of our mining operation is key to the overall success of the business and having an experienced mining contractor is an essential part of this process. I believe that our partnership with the wider Teichmann Group will provide further benefits going forward as we continue to implement our defined growth strategy.”