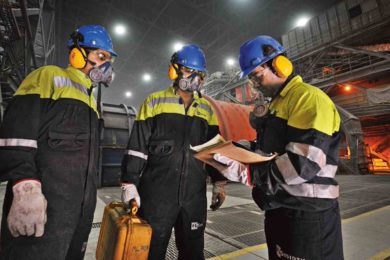 FLSmidth’s June quarter saw an improvement in revenue and profitability as the company’s Mining and Cement divisions continued to perform strongly.

The company’s order intake for the June quarter amounted to DKK5 billion ($752 million), down 2% from the same period a year ago. Mining order intake, specifically, declined 7%, mainly due to a lower capital order intake, the company said. This included an order of around DKK375 million from Rio Tinto for its Koodaideri iron ore project.

During the quarter, the company also completed the acquisition of IMP Automation.

FLSmidth’s order backlog stood at DKK16.8 billion by the end of June, up 16% from the same time last year.

Revenue increased 16% year-on-year in the quarter to DKK5.5 billion on high activity level, while earnings before interest taxes and amortisation came in at DKK487 million, up 28% year-on-year.

FLSmidth Group CEO, Thomas Schulz, said: “The second (June) quarter showed a strong performance with improved revenue and profitability, driven by both Mining and Cement. Following a slow start to the year, we have been successful at converting backlog to revenue in the second quarter. In close cooperation with our customers, we have continued to deliver on our vision to provide sustainable productivity enhancement.”

Schulz continued: “Our success with both service and capital orders, demonstrates our customers’ confidence in our ability to enhance their productivity. This is supported by an increased push for sustainable solutions that ties in well with our position, capabilities and track record.”

In the company’s Mining division, Schulz said the company saw increased interest for new technologies such as dry stack tailings, but also a general need to reduce water consumption in the production process. The company said the mining market remained robust.

The company added on the mining market: “Equipment demand continues to evolve around replacement and brownfield projects, with select greenfield opportunities. Miners are attentive of rising global issues and remain cautious on large and high-risk investments. The long-term pipeline for larger projects is encouraging, but most projects are currently not reaching further than the engineering/prefeasibility stage.”

It continued: “Customers across regions and commodities are increasingly demanding digitalised solutions to improve performance, reduce operating costs and maximise safety in operations. Similarly, customers show increased interest in technology to obtain a more sustainable production, not least our effective solutions for tailings management given the latest issues with tailings dams failures and the related environmental impact.”