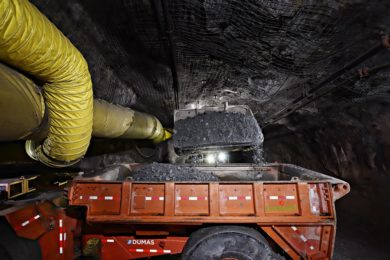 Newmont Goldcorp’s Borden development may have stolen the mine electrification limelight in the last 12-24 months in Ontario, Canada, but with this all-electric mine close to starting up, another project in the province is laying the groundwork to follow in its footsteps.

The Madsen project is a former-operating underground gold mine situated in the renowned Red Lake region. Since acquisition, Pure Gold Mining has been adding ounces to the 43-101 reserve and resource categories, while rehabilitating the old workings to generate a viable plan to re-start mining.

The February feasibility study outlined an economically sound project, costing C$95 million ($72 million) in upfront capital and returning an after-tax net present value (5% discount) of C$247 million using a gold price of $1,275/oz. This study included details of a mining and development fleet made up of a combination of diesel and battery-powered load and haul equipment.

With mine electrification still high on IM’s agenda following the inaugural Electric Mine conference in April, in Toronto, Dan Gleeson spoke with Pure Gold President and CEO, Darin Labrenz, to find out more about the company’s electric equipment plans.

IM: You recently raised C$47.5 million to continue development work and carry out further exploration at Madsen. Can you breakdown how much will go towards exploration/development?

DL: We’ve closed two raisings this year. The one earlier in the year was a C$5.2 million flowthrough raise designated for exploration. Those funds will go towards a drilling program in the order of 12,000 m directed towards those resources and discoveries that lie outside of the feasibility study mine plan…with the goal of being able to bring them into a future mine plan.

The C$47.5 million is what I would call the ‘equity component’ of a project financing package. Some of it may ultimately go into exploration.

Then, in August, we announced the $90 million project financing package with Sprott Resource Lending Corp comprised of a credit facility for $65 million, and a $25 million callable gold stream. This allows us even more flexibility on how we want to explore the exciting tenement as well as other opportunities.

IM: What type of development work is going on at Madsen currently?

DL: Last year, we conducted some trial mining, which involved extending the ramp a short distance; lateral development underneath the base of two stoping areas (as well as a couple of raises into those areas); and rehabilitation of the historical Number 2 level back to the existing shaft to provide secondary egress to the mine. We also initiated dewatering last year and have brought the water level down; right now, we’re holding it constant at about 250 m below surface. We’ve also done a lot of surface work to clean up and prepare the site for future activities.

With the debt financing now complete and a decision to construct by the board, detailed engineering in advance of site development work will commence immediately. We expect surface works and underground development to commence in Q4 (December quarter) of 2019.

IM: Based on current progress, when do you expect to produce first gold at Madsen?

DL: With access to the capital provided by the recently announced financing, the construction of the Madsen Red Lake mine is now fully funded. Combined with the equity financing, this secured approximately C$90 million of immediate funding enabling us to initiate construction and put us on track for first gold pour by late 2020.

IM: What factors came into play when deciding on the use of battery-electric equipment at Madsen?

DL: The key drivers for us were operating costs, environmental benefits and improved working conditions.

The use of electric equipment underground really eliminates a large component of the operational greenhouse gases that would be emitted from the mining operation, but also key is the reduction in ventilation requirements: the use of an electric fleet is going to require about 50% less ventilation. When you look at the life of mine at Madsen – with the combination of power and propane that would be used – you’re looking at savings of around C$41 million by going down the electrification route.

The ventilation benefits really increase with depth as you continue to push the mine down. Electrification allows the mine to push ramps down more efficiently, while reducing operating costs at the same time.

From a social, community and regulatory perspective, the move to a more environmentally friendly operating environment is also being well received.

IM: How did the company balance the capex issues with the opex benefits when choosing battery-electric haulage equipment over conventional diesel?

DL: The capex is higher for electric fleets – these costs are reducing, and I would expect to see them to continue to reduce into the future as that technology advances. Saying that, the increases in capital over diesel equipment are more than covered by the operating cost improvements that come with the reduced ventilation and heating requirements.

One of the limiting factors in ramp-supported operations is ventilation. As you go deeper and deeper in a mine, you need to drive more and more air down to these depths. Ultimately, you get to a point with deepening a mine where you just cannot push enough air to clean out the diesel from the operating environment. With an electrified fleet, you can have narrower openings and you can push those ramps much deeper as the ventilation requirements are reduced.

IM: Have any investors raised concerns about this planned mine electrification?

DL: While we haven’t received any specific concerns, we have been asked about the technology’s availability and reliability. We can now point to several operations in Canada that are transitioning to electrical equipment. Many of the major equipment suppliers are also transitioning and starting to provide electrified versions of existing diesel equipment. That technology has been rapidly advancing and will continue to do so.

For us, looking to go into operations in the near-term, initially starting with the diesel equipment and transitioning into the electrical equipment reduces any risk from an availability and operating perspective.

IM: Is the move to start with diesel and go into electric also predicated on the flexibility required during development/production?

DL: It’s a few things. Primarily, when you look at the early years of mining, we are mining much shallower and the ventilation requirements are that much lower, so you see limited operational cost benefits when using electric equipment. From a capital perspective, initiating operations with diesel equipment allows us to be capital efficient, as well as equipment availability being high.

IM: What was the reason behind the plan to use a tethered 6 t LHD close to the loading station and 6 t diesel LHDs elsewhere?

DL: The use of tethered equipment is a function of how much this 6 t LHD has to travel in the mine plan. Its purpose is to transfer muck into the loading pocket shoot, so it has a limited travel path.

On the other large LHDS, obviously we would use electric equipment should it be available at the time we need to procure it.

IM: Are you looking to use any other battery-powered or tethered equipment underground?

DL: We would look at electric equipment wherever it is practical and available. Currently utility vehicles such as man carriers, telehandlers, etc are available and will be utilised.

It will be something we consider at the time of the purchasing. We would look to use electric equipment as much as possible.

IM: Do you envisage other juniors going down a similar mine electrification route in the near-term?

DL: I believe so.

My perspective on this is that electrification of underground equipment is one of the great innovations in underground mining technology over the last decade. It has a very pronounced impact on operating costs, it obviously improves working conditions underground without the occurrence of diesel particulate matter and improves the ability to move your mine system deeper. It, importantly, also results in a real reduction in greenhouse gases, which reduces the environmental impact of underground mining.

Electrification is one of those rare cases where we see not only a strong operational reason for a move to that technology, but also a pronounced positive impact on the workforce and surrounding community.