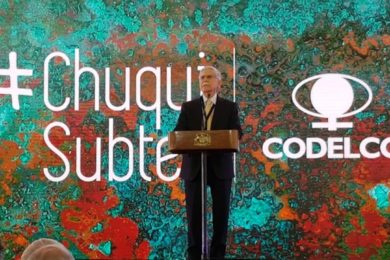 In a ceremony attended by more than 250 people, including authorities, representatives of the community and industry, suppliers and workers of the company, Codelco has inaugurated its most emblematic project, Chuquicamata Underground. “Today is an important day, few companies have had to reinvent themselves as Codelco has done. This project will extend the useful life of this mine by 40 years and required a gigantic effort in design, creativity, and adapting to the new times, ”said President Sebastián Piñera.

After 104 years of exploitation, the world’s largest open pit mine became a highly technological underground operation prepared for environmental and safety standards of the 21st century. At the ceremony, the President of the Board, Juan Benavides, emphasised that as of today “a transformation that will maximise the economic value of the company and its contribution to the State in the long term begins. And for that, we will put all our will, talent and commitment to strengthen the skills we need to achieve it.”

The executive added that “with better projects and greater development of its resources we commit ourselves to reposition Codelco among the most competitive, sustainable and profitable copper producers in the world. The structural projects, including Underground Chuquicamata, made it possible to hasten this transformative path that involves us all. We are proud of what we have advanced and enthusiastic about the road ahead.”

Meanwhile, the Executive President of Codelco, Nelson Pizarro, highlighted the enormous magnitude of the work behind this great engineering work. “It began in the mid-90s with the exploration stage, with almost 150,000 m of drilling. It involved an 18-year cycle of investments from the profile stage that we started in 2002 until the start of production, in 2019. To materialise the project we will use 30 million direct total man hours and more than one million man engineering hours ” he explained.

Pizarro highlighted the almost 40% increase in productivity expected in this mining operation, which will reach 61 fine metric tonnes (tmf) per person in 2025, compared to the 44 tmf/person currently held by the Chuquicamata Division.

The mine, which has reserves for 1,028 Mt of copper ore, with a 0.82% grade, will produce 320,000 t of fine copper annually, by around 2026. The underground work will be three levels deep, with a total of more than 898 m from the bottom of the current pit and more than 2 km from the surface. Underground exploitation will allow a more modern, efficient and sustainable production, as the division will reduce by 97% the emission of particulate material (PM10), will not increase water consumption and will annually reduce diesel consumption from 75,000 cubic metres (m³) at a figure between 2,000 and 15,000 m³.

During the operation, the underground mine will be controlled from the Integrated Operations and Management Centre, which will operate on the surface, 8 km south, in the Minister Hales Division. From that centre, specialised workers will telecommand the production by remotely driving the semi-autonomous LHD transport and unloading trucks, which operate at the production level, through the crushing systems and the belt system until they reach the plant.