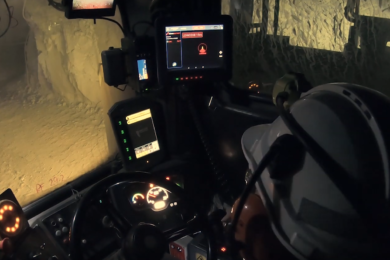 Recognising that underground mines would benefit from the same technologies that surface mines have been enjoying for many years, Caterpillar recently enhanced its technology portfolio to offer new and expanded capabilities that fully integrate underground mining operations.

The company says its expanded Cat® MineStar™ technology offerings are already making a big impression with miners, with one operations manager calling the solutions a game-changer. Newmont Goldcorp’s Tanami gold mine in Australia has implemented MineStar Fleet for underground, which provides real-time visibility to cycle time, payload and other key operational parameters. Thanks to a proprietary high-precision positioning technology, mines can also accurately track personnel and assets to sub-metre accuracy.

Aaron Nankivell, Mining Operations Manager at Tanami Operations states: “Last year I was asked if Tanami Operations wanted to participate in the trial for the MineStar for underground technology. I jumped at the chance, not just because we’d be first in the field but it was our opportunity to influence the direction that it took. A technology that gives us the ability to be able to see what’s going on and where things are at, and to be able to intervene and make decisions in a timely manner is a big opportunity for us, and every mine in fact. This is a game changer in that it removes hope and restores control. The status quo is sitting down at the start of the shift, coming up with what you think is the best plan, putting it in motion and hoping it goes to plan. MineStar for underground gives us the opportunity to work right until the very last minute and recommence work after blasting as soon as possible.”

Nankivell gave some specific examples of the difference the system makes: “A good example is with our stope bogging. We don’t have a clear picture of the productivity of those loaders other than what they report at the end of the shift. MineStar for underground gives us a real time view of the productivity at the drawpoint, to identify those areas where we can change the design, we can change the deployment, and make sure we are maximising that activity. Another fantastic element of MineStar for underground is the way that it integrates with our planning process. Your whole front end mine planning schedule is already built into the software, so this isn’t just a tool that captures what’s happening, this is a tool that’s actually integrated in what should be happening. The real benefit for Cat MineStar for underground is the way that is captures and presents data. Any system can capture a lot of data but if that means someone has to go an interrogate that data days or weeks later, you’ve lost the opportunity to intervene and use it in a useful way. MineStar for underground presents the data immediately, its capturing it in real time and there’s an interface there that supervisors can use straight away to intervene and make decisions.”

Graham Foster, Tanami Operations LHD operator states: “It does make life a bit easier if they want to change your job – less radio contact…it just pops up on the screen. With underground mining there is a lot of radio going on, sometimes it gets spoken over. At least with a visual task you can see, yep, no worries, this is what I’ve got to do and go and start that job.” Duncan McGill, Shift Supervisor, Tanami Operations says: “Some jobs can take a long time to reallocate to a different task if you can’t get hold of people. Everything will happen a lot quicker.”

Grant Cunningham, Operations Engagement Architect, Tanami Operations: “I think the uniqueness in the market for MineStar for underground really comes from the tracking capability of the system. The ability to be able to see where everything is, within a metre basically, that allows a GPS type tracking capability underground. The system will allow operators to get an understanding of their task plan at the beginning of the day. They’ll be able to get updates on a regular basis…so for machines like jumbos and boggers that enables them to continue on with their day and removes the need for them to spend a lot of time on the communications system.”

Talking about the Proximity Detection element, Cunningham says: “The HP Proximity Detection works out of range, it doesn’t have to be in WiFi coverage, and gives that spatial awareness for the machine operator front and back, distance and direction.”

Radislav Golijanin, General Manager Tanami Operations: We are excited about the safety feature Proximity Detection…I believe its an improvement on what we’ve currently got and I particularly like the visual display that it gives the operators.”

Foster said of the safety of the system: “Well you don’t want injuries, you don’t want vehicles running into each other. MineStar safety wise, its going to make a big difference because you’ve got prewarning, and you can physically see where those people or that equipment is. It actually shows vehicles or personnel coming on to the level; you can judge where they actually are by the map and when they’re in range, you get warnings to say they are within a certain distance and it seems to work really well.”

Finally on the mine planning element, Cunningham states that MineStar for underground: “allows the removal of any misunderstandings and aligns production with engineering. That connection means your plan is on track more often than not. The package comes with a system called Data Pro which allows you to integrate a business intelligence platform and your data is readily available. That gives you the ability to do real time dashboarding, scheduling of reports, giving instantaneous feedback on where the shift is actually currently at…and if you get it early enough steer the shift back onto the plan for the day.”