Cummins powers up for AIMEX show 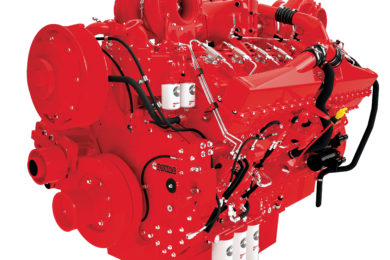 The Cummins stand at the upcoming AIMEX event in Sydney, Australia, will feature its QSK60 MCRS ‘Advantage’ engine (pictured), a rare 1922 3 hp engine and the new HSK78G gas generator set.

The QSK60 on display will highlight the lower life cycle costs that are being achieved with this latest technology 60-litre V16 platform.

Close to 200 ‘Advantage’ engines are now in service across Australia’s mining regions, powering 2,500 hp haul trucks, according to the company.

The high-pressure Modular Common Rail Fuel System that features on the QSK60 is, according to Cummins, a key element of the technology roadmap for mining companies as they strive to increase productivity while reducing operating and maintenance costs through lower fuel consumption, longer life-to-overhaul and longer service intervals.

At the other end of the horsepower scale, Cummins will display a 3 hp, single-cylinder 1922 engine to highlight the company’s 100th anniversary. This rare diesel engine was one of the first built by Clessie Cummins in Columbus, Indiana – the launch pad for the company.

The HSK78G will also be previewed at AIMEX, a generator set aimed specifically at the mining industry. With a power density of 2 MW from the new Cummins 78-litre, V12 gas engine, the HSK78G provides high electrical efficiency up to 44.2% on a wide range of pipeline natural gas down to 70 methane number (MN) without impacting power and efficiency output, according to the company.

“In fact, the new genset has been designed to provide reliable power, regardless of the natural gas source or the environment, including extreme heat up to 55°C and extreme altitudes,” Cummins says. “In its class, the HSK78G also has the industry’s longest major overhaul service cycle of 80,000 hours.”

Visitors to the Cummins display can step inside the HSK78G Experience Pod room and go through a journey of different extreme and urban environments, from blistering hot deserts to cityscape settings, to understand the full capabilities of the HSK78G series, the company says. An interactive touchscreen will be displayed, allowing visitors to explore the complete HSK78G generator model in 360° mode and learn more about its key technical features.

Cummins will also be displaying the KTA19GC gas engine for various mining applications such as powering underground coal mine ventilation systems. With ratings up to 420 hp at 1,800 rpm, this 19-litre natural gas engine shares the proven heritage of Cummins’ K-series Diesel engines, the company said.