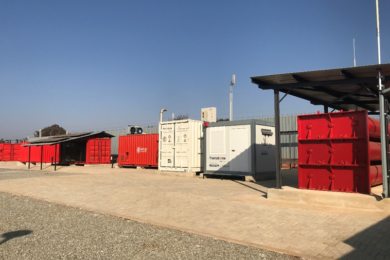 Dr Dmitri Bessarabov is Director of the Hydrogen South Africa (HySA) Infrastructure Center of Competence at South Africa’s North-West University (NWU) and the Council for Scientific and Industrial Research (CSIR). He was recruited for the HySA position from Canada and brought to South Africa a lot of relevant hydrogen industrial experience, notably, in fuel cells and electrolysis. In Canada he was associated with Kvaerner Chemetics, Ballard Power Systems and AFCC (Daimler and Ford JV). IM spoke to him about the potential for the use of hydrogen fuels in underground mining as well as the associated challenges.

Bessarabov stated: “The mining industry in general relies on heavy diesel powered vehicles and machines emitting CO2, CO, NOX and DPM (Diesel Particulate Matter). The World Health Organisation (WHO) classifies diesel engine exhaust as ‘carcinogenic to humans.’ Underground mining requires managing heat from diesel engines and ventilation, both of which add substantial cost, which is why the mining sector faces a number of challenges such as high operating costs associated with ventilation costs, maintenance of diesel equipment and lack of automation and tele-remote operations. The cost of the flame-proofing of diesel equipment for underground operation is also high. While diesel engines are becoming cleaner, this will increase costs and can reduce efficiency, which adds to fuel costs; these factors can reduce the cost barrier to adopting alternative technologies such as fuel cells.”

Underground deep mines represent an option for deployment and operation of hydrogen fuel cells (FC). Benefits include lower emissions, improved health, comfort and safety, as well as reduced operating costs. “Underground mining trucks, loaders and other machines have power ratings up to 750 kW, which proves difficult for battery and tethered electric energy. Hydrogen FCs have the ability to overcome these power and energy storage limitations. The risks and technologies associated with delivering, storing and using hydrogen underground first need to be investigated and proven safe.”

The use of hydrogen fuel cell powered machines in a ventilated underground environment also introduces a number of concerns and uncertainties that require evaluation. “There is a need for guidelines and, ultimately, standards that can be implemented for the safe operation of hydrogen powered fuel cell vehicles. The main concerns associated with hydrogen powered vehicles and machinery in confined space are hydrogen leaks and the occasional venting of hydrogen from fuel cell systems. These scenarios either need to be avoided, or managed in a safe manner. Hydrogen leaks and venting poses a risk in underground mines due to the confined spaces and pockets where hydrogen can accumulate in higher than the lower flammability limits.”

The limitations as well as numerous benefits mentioned have motivated the need to develop a research infrastructure platform dedicated to hydrogen safety device testing and validation and qualification of underground risks using hydrogen based fuels in both ventilated and unventilated confined underground mining spaces and due to the nature of the problem, tunneling activities will also benefit.

An underground mining ventilation testing facility (VTF) was designed and constructed at the HySA facility at the North-West University, South Africa. The purpose was to evaluate risks associated with different hydrogen storage technologies in a confined environment. Operated by HySA at NWU, the facility includes a 50 m long ventilation facility, air compressor, on-site hydrogen electrolytic generation powered by PV, hydrogen storage options (in the form of LOHC and compressed gas), as well as dispensing system and a set of hydrogen sensors. The project was funded by the Department of Science and Innovation, South Africa.