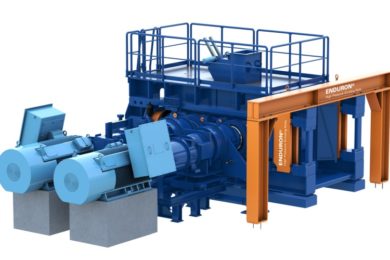 These units also reduce water and energy consumption, two resources that miners are actively looking at within their operations.

In the company’s June quarter results, Weir noted that it had seen strong demand for its Enduron HPGR technology, adding that the company had been contracted to support a large greenfield development in the UK in the period.

Whether recirculated through primary milling or separated and sent to a dedicated downstream pebble mill, pebble crushing is an energy-intensive operation that ties up a site’s limited resources, Weir says.

Ranging in size from 25-90 mm, pebbles are oversized material produced from autogenous and semi-autogenous grinding, which are too coarse to be crushed by larger lumps of ore and steel balls and too fine to act as grinding media themselves.

As such, pebbles (or critical particle size material) reduce the efficiency of any mill they’re returned to, increasing power consumption and decreasing throughput, Weir says.

When pebbles comprise a large proportion of a (S)AG mill’s feed as they’re returned multiple times, the proportion of large particles which have the power to crush with the force of their impact is reduced and new particles are instead subjected to additional attrition and abrasion. “This can over-grind fines, producing unsuitable ultra-fines,” Weir says.

Regardless of whether they’re receiving feed directly from an upstream SAG mill or further reducing pebbles that have passed through a dedicated cone crusher, HPGRs offer highly efficient reduction, generating substantial amounts of fines that reduce the energy required for downstream milling, Weir says.

“The fineness of products is one of the key compromises in conventional pebble circuits, with pebble crushers unable to maintain high throughput without sacrificing the proportion of well reduced particles.”

By virtue of their variable roll speeds, HPGRs can maintain high levels of throughput without generating a coarser product, allowing a significant amount of product to bypass downstream mills via pre-classification, the company explained.

To obtain the greatest efficiency, an appropriate control system should be selected to monitor and maintain the material level in the HPGR feed chute and control the roll speed and apply optimal operating pressure based on the presented pebble feed rate and quality, according to Weir.

One thing to note when deploying a HPGR in a pebble crushing circuit is that truncated feed (one with a narrow size distribution) may cause higher wear on the surface of the machine’s rollers than encountered in other applications. This is due to the more “mobile” particles generating a weaker autogenous wear layer where the coarse pebble fragments chip away at the coating on the roll-surface.

Oversized rocks that are larger than the machine’s operating gap will further wear away at the roller surface, making the use of a safety screen advisable if the preceding crusher’s output isn’t strictly controlled, Weir says.

Similarly, when placed after a (S)AG mill, a significant quantity of oversized or tramp materials can disrupt HPGR operations. “With their unique ability to dynamically skew their bearings to accommodate varying feed conditions, Enduron HPGRs cope better than other HPGRs under these conditions,” the company said.

However, to further reduce damage to wear materials, a well-designed detection and removal system should be applied, Weir advises. “This would consist of a tramp magnetic separator, a metal detector, and a subsequent tramp metal rejection facility. Such a system should preferably be installed as close as possible to the HPGR, preferentially directly ahead of the HPGR feed chute.”

In circuits with particularly heterogenous ore competencies, such as transition gold ores or coarsely-banded iron ores, HPGRs should be run at variable speeds to ensure throughput is maintained regardless of the feed conditions, according to Weir.

The company concluded: “With the ability to maintain this high level of throughput across a variety of ore types without compromising the fineness of their product, Enduron HPGRs represent an ideal, energy-efficient addition to most pebble crushing circuits.”