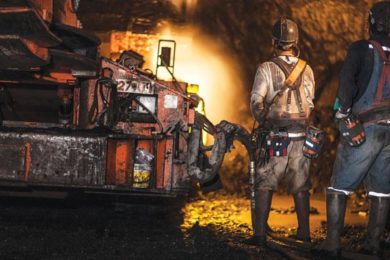 Strata Worldwide is building on its Australia-first application of proximity detection on underground shuttle cars in a Queensland coal mine and expects to see the same mine install and commission a vehicle-to-vehicle interaction component within the next 12-18 months.

Strata said earlier this month that, as a proactive safety measure, one of the world’s leading mining companies had been undergoing extensive research on Strata’s HazardAvert® proximity detection technology. The mining client and Strata Worldwide worked together to test and trial the technology in underground coal mining environments, with the miner’s primary goal being to reduce the potential risks to people working in close proximity to mobile equipment.

HazardAvert proximity detection field generators, installed on equipment, form electromagnetic warning and danger zones around the machinery, according to Strata Worldwide. These zones are detected by the HazardAvert Personal Alarm Devices installed on miner cap lamps or worn on the miners’ belt. When the zones are breached, either by a miner entering the zone or by the shuttle car approaching a miner, the system alarms and alerts both parties. To overcome situations where reaction time is limited, the system can be interfaced into the controls of the equipment to automatically slow or stop the machinery, the company added.

Proximity detection has been used on shuttle cars in the US and South Africa for a good few years as regulators in those regions mandated the use of the technology. This Queensland installation is the first approved system to be introduced in an Australia coal production scenario, however.

At the AIMEX 2019 event, Paul Mullins, Global Product Manager for Strata, provided IM with some more detail on this recent project win, which was the culmination of two years of due diligence work at the mine. Over this period, underground shuttle cars were fitted with the proximity detection technology required as they were brought in for overhaul, allowing the mine to keep up with its coal production targets.

The physical installation of the proximity detection system was undertaken at Komatsu’s Rockhampton facility, in Queensland. Komatsu worked with both Strata and representatives from the mine operation to re-design the control system of the shuttle cars to ensure the system effectively integrated with the machine, according to Komatsu.

“In doing so, Komatsu were able to ensure the shuttle car automatically functioned in the manner requested by the mine operation, in the event the proximity detection system alerted the presence of mine personnel,” Komatsu said.

The machine was designed to slow down when miner personnel entered a ‘warning zone’ and stop in the event mine personnel became too close to the shuttle car and entered the ‘stop’ zone.

Komatsu and Strata both worked with the mining operation over the two year period to ensure the relevant hazards were understood and controlled, which has led to incremental improvements being made to the integrated system throughout the trial period.

Strata’s Mullins said the system had been running in sections at the mine since the start of this year, with 40-50 people now equipped with HazardAvert Caplamps. The mine in operation has four production crews, with two of these crews currently using the vehicle-to-personnel proximity system, he said.

By the end of the year, Mullins is expecting all shuttle cars, personnel and continuous miners at the operation to be equipped with the technology. He then expects the mine to move towards vehicle-to-vehicle interaction, which involves adding proximity detection to LHDs at the mine, within the next 12-18 months.

Vehicle-to-vehicle interaction would be a global first in underground coal mining environments.

This is not all for Strata Worldwide, with Mullins saying the company is currently working with other coal mining companies in Queensland on similar proximity detection projects.

Strata Worldwide also used the AIMEX 2019 event to unveil its DigitalBRIDGE Plus+ solution to improve existing leaky feeder systems by “digitising the network and expanding connectivity capacity in the mining and tunnelling industries”.