Suncor to cut GHG emissions by 25% with natural gas project 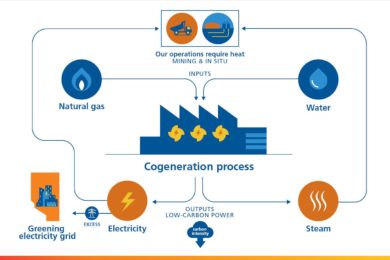 Suncor has made the decision to replace its coke-fired boilers with two cogeneration units at its Oil Sands Base Plant, in Alberta, Canada, as it looks to lower its carbon footprint within the province.

The cogeneration units will provide reliable steam generation required for Suncor’s extraction and upgrading operations and generate 800 MW of power, the company said.

The power will be transmitted to Alberta’s grid, providing reliable, baseload, low-carbon power, equivalent to around 8% of Alberta’s current electricity demand. This project will increase demand for clean natural gas from Western Canada, Suncor said.

Mark Little, President and CEO, said: “This is a great example of how Suncor deploys capital in projects that are economically robust, sustainability minded and technologically progressive.

“This project generates economic value for Suncor shareholders and provides baseload, low-carbon power equivalent to displacing 550,000 cars from the road, approximately 15% of vehicles currently in the province of Alberta.”

The project cost is estimated to be C$1.4 billion ($1.06 billion), delivering a high teens return and projected to be in-service in the second half of 2023.

“This project will substantially contribute to the company’s goal of an increased C$2 billion in free funds flow by 2023,” the company said. “This will be achieved through oil sands operating cost and sustaining capital reductions along with margin improvements. It will also contribute materially to Suncor’s publicly announced greenhouse gas (GHG) goal.”

Replacing the coke-fired boilers with cogeneration will reduce GHG emissions associated with steam production at Base Plant by some 25%. It is also expected to reduce sulphur dioxide and nitrogen oxide emissions by approximately 45% and 15%, respectively, the company says.

The cogeneration units will eliminate the need for a flue gas desulphurisation (FGD) unit, which is currently used to reduce sulphur emissions associated with coke fuel. Decommissioning the FGD unit will reduce the volume of water the company withdraws from the Athabasca River by around 20%.

“By producing both industrial steam and electricity through a single natural gas-fuelled process, cogeneration is the most energy-efficient form of hydrocarbon-based power generation. Suncor believes this project will contribute to both Alberta and Canada’s climate ambitions.”