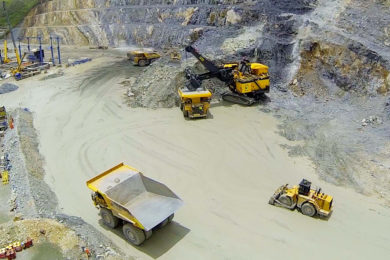 Nokia and Telefónica Peru have signed a contract with MMG’s Minera Las Bambas, the world’s ninth largest copper mine, to enable digitalisation and automation projects at its site in Apurimac, Peru. The contract will build and deploy a private LTE network 4,600 m above sea level, then perform an assessment of the mine applications in order to begin services migration to the new network. The contract includes planning the site’s capacity and providing technical support for the next five years.

As part of the deal, Nokia will deploy its LTE Radio Access Network solution, including base stations, technical support and training services to enable more reliable communications between machines and people. The new network will improve existing wireless service, allowing Las Bambas to deploy additional safety solutions and reduce operating costs of its Tetra communication system. As the network evolves further towards 5G, the Las Bambas mine will also benefit from push-to-talk and push-to-video.

“Mining operations often require highly reliable networks that can cover large outdoor sites. Complementing services such as Wi-Fi, private wireless solutions offer more secure and reliable wireless coverage. They also enable an evolution of new services in mining, thanks to providing a trustworthy, high-capacity, low-latency and multi-services network that enables connectivity for several thousands of workers, mine devices and applications. To embrace the Fourth Industrial Revolution, asset-intensive industries such as mining need to digitalise their processes and systems to drive extreme automation. Automation relies on the ability to sense, analyse and act. To do so, these industries will need to connect all sensors, machines and workers in the most flexible way – and for that they need business and mission-critical wireless networking solutions such as private LTE.”

Nokia says it has a wealth experience in deploying industrial-grade private wireless solutions for mining, which have been certified with several key automation manufacturers such as Komatsu and Sandvik. “Nokia has also pioneered the private wireless space for multiple verticals, with over 80 large enterprise customers deploying private LTE around the world and leveraging an industry-leading, end-to-end wireless networking portfolio tailored to meet the mission- and business-critical connectivity needs of its industrial market customers.”

Miguel Canz, Regional Technology Manager at Minera Las Bambas, said: “This is an important milestone for Minera Las Bambas as it will enable a series of new automation technology solutions increasing productivity in our mining operation as well as supporting more advanced automation to improve worker safety.”

Dennis Fernández, B2B VP at Telefónica Peru, said: “We’re working closely with Minera Las Bambas to provide an end-to-end connectivity solution for their operation that allows them to focus on their core business, while we care for the connectivity.”

Osvaldo Di Campli, Head of Latin America for Nokia, said: “This private LTE network will allow the Las Bambas mine to increase productivity and automation and, in doing so, embrace the Fourth Industrial revolution. Nokia has a wealth of experience providing such mission-critical, industry-revolutionising networks, and we’re proud to partner with Telefónica Peru in bringing these capabilities to Peru for the first time.”