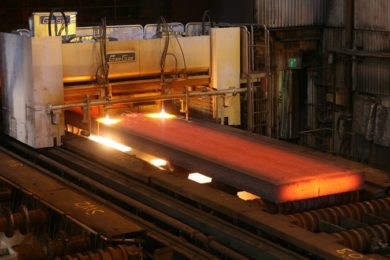 The partners of the HYBRIT project, LKAB, SSAB and Vatenfall, have said they could move up their plans to build a fossil-free steelmaking demonstration plant by three years, to 2025.

Writing in Swedish daily newspaper Dagens Nyheter, the Presidents and CEOs of the three companies, Martin Lindqvist (SSAB), Jan Moström (LKAB) and Magnus Hall (Vattenfall), said they were ready to step up their work for fossil-free steel production and to move up plans to reduce carbon dioxide emissions.

The aim of HYBRIT, which is supported by the Swedish Energy Agency, is to develop a process for fossil-free steelmaking by 2035.

In 2018, the Swedish Energy Agency announced it would contribute funding amounting to more than SEK500 million ($54 million) towards the pilot-scale development of an industrial process, with three owners, LKAB, SSAB and Vattenfall, each contributing a third of the outstanding capital for the project.

Back in April, the partners said construction of a biofuel-based pelletising plant would shortly begin at LKAB’s Malmberget site, in Sweden. This “world-unique test facility”, a key component of the HYBRIT initiative, will see fossil fuels replaced with biofuel to achieve fossil-free production of iron ore pellets.

In the opinion piece in Dagens Nyheter, the company heads said: “We are ready to increase efforts from our side, but if we are to achieve success, society and lawmakers must do the same.

“We are already looking into the possibility of building a demonstration plant in 2025, three years ahead of plan, so that we can immediately thereafter produce iron ore-based, fossil-free steel for commercial use.

“The goal is to be selling fossil-free produced steel on a broad scale by 2035,” they said.

The three companies highlighted four important preconditions for this rapid transition to succeed:

The three concluded: “Steel is an amazing material. It builds communities, is hard-wearing and can in principle be recycled an infinite number of times.

“But recycled steel will not be enough. In line with social development, population growth and increasingly higher standards of living all over the world, demand will increase for new steel made from iron ore. Therefore, sustainable solutions are needed; solutions that contribute not just to solving climate change, but to social development.”