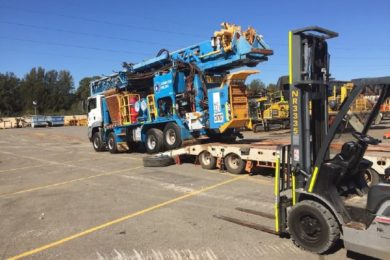 Pentium Hydro is in the process of mobilising a drill rig and auxiliary plant to Fortescue Metals Group’s Chichester iron ore operations, in the Pilbara of Western Australia, as part of a purchase order that could see the Vysarn subsidiary pocket A$800,000 ($549,866).

Following the purchase order, Pentium has already started transporting the equipment to Newman, Western Australia, for final inspection. Following signoff of the equipment, it will then head to Cloudbreak with Pentium expecting to commence drilling, subject to a formal agreement being signed, by the end of September.

In addition to this latest contract win at Cloudbreak, part of the Chichester Hub operations which has an annual production capacity of 100 Mt/y, Pentium says the first of two scheduled drill rigs has arrived on site at BHP’s Olympic Dam mine in South Australia (pictured).

This delivery is part of a dry hire agreement signed between Pentium and Easternwell WA, which was previously announced on August 16. The second rig destined for Olympic Dam has been despatched from the company’s yard in Canning Vale, with the company expecting these units to begin operating and produce income during this month. The hire rates for this equipment, while on site, are (in aggregate) A$4,500/shift, with each rig able to operate for a maximum of two shifts per day.

This agreement provided for the equipment to be hired on site for a period of at least three months and no more than six months (unless the scope is reduced by BHP).

As Pentium Managing Director, Sheldon Burt, implied, this latest business is significant considering Vysarn only completed the acquisition of Pentium from Ausdrill at the end of last month.

“We are pleased with the quality of the assets purchased and are confident of our ability to become a major provider of waterwell drilling services to the resource, agriculture and infrastructure industries,” he said.