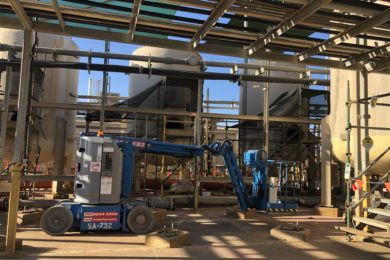 The operation, which uses a unique extraction technology to produce high purity uranium, was after a solution with good chemical resistance that was able to withstand high operating temperatures after, a planned upgrade revealed issues with the existing rubber lining of the exchange vessels.

The lining failure had caused corrosion of the steel substrate (which had continued to go unnoticed behind the rubber) and now had the potential to severely impact production and ultimately shut them down completely, according to Belzona.

“The exchange vessels measure at around 2.5 m in diameter and 5 m in height and are considered the lifeblood of their business,” Belzona said. “The process conditions meant that there was a strong chemical presence and high operating temperatures further contributing to the corrosion of the lining.”

Two of the vessels were able to be viewed, due to being out of service, helping to understand the process conditions.

The existing rubber internal lining had to be removed using a high temperature, ultra-high-pressure jet water operating at 150°C and 40,000 psi pressure. This stripped back the rubber lining, leaving a bare steel shell with only small amounts of rubber remaining. This was then whip blasted and any sharp angles, burrs and weld defects were identified and prepared to a minimum R5 radius suitable for coating, according to Belzona.

Following on from the pre-surface preparation, the vessel was degreased using high-pressure water jetting at 6,000 psi followed by a solvent wash using MEK before being blasted.

Before the new internal linings were applied, nozzle inserts were fitted with a stripe coat of Belzona 1391T to the circumferential welds and bracket details. Nozzle inserts manufactured using Belzona 1511 (Super HT-Metal) were initially dry fitted into the appropriate nozzle where they were then marked and cut to size before being bonded in place using Belzona 1391T.

Small areas of pitting around the welds were filled at the same time and allowed to cure. After the required length of time and within the overcoat window of Belzona 1391T, the stripe coat was applied to the welds and large nozzles. Spraying of the new internal linings began once the stripe coatings were cured.

Belzona said: “To provide a full turnkey solution without any delays, blasting of the second vessel began whilst the first vessel was being coated. The original coating was then left to cure overnight with a second coat to follow the next day. Heat was applied to the vessels to assist in providing a fast cure time and return to service.”

Thanks to effective time management throughout, the overall application was able to be completed very quickly, with each vessel taking a few days to complete, Belzona said. The vessels have now gained long-term protection against corrosion and a longer service life.