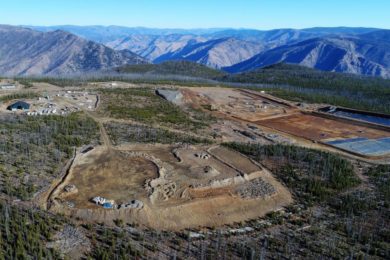 Jervois Mining says it has selected DRA Global and M3 Engineering as lead engineers for finalisation of a bankable feasibility study (BFS) for its 100%-owned ICO cobalt-copper project in Idaho, US.

The selection of engineers comes only two months after Jervois got its hands on the project following a completed merger with eCobalt.

Jervois said: “DRA and M3 have extensive study and construction experience across all the relevant unit operations for the ICO, providing a strong basis for successful BFS delivery. They were chosen due to their strong track record with relevant process plant studies as well as construction and operating implementation phases, as Jervois looks to move seamlessly into construction after BFS and project financing close.”

The joint engineering team has extensive global experience across both cobalt and copper mining operations and concentrator flowsheets, while also having a detailed understanding of project delivery in the US, specifically local conditions in Idaho and regional contractor capabilities, Jervois said.

Finalisation of the BFS will be based on a flotation mill processing 1,200 short tonnes per day (1,089 t/d) of ore, as well as ancillary facilities. The project will ultimately consist of an underground cobalt-copper mine, a flotation mill processing 1,200 st/d as well as ancillary facilities. The latter will include aspects such as the mine and related infrastructure, run of mine pad and crushers, fine ore conveyor and silo, mill and flotation, tailings, waste rock and water storage facilities, water treatment plant, soil stockpile area, National Pollutant Discharge Elimination System discharge outfall and non-process infrastructure to support the development and mine operations.

Jervois expects the BFS will be concluded in the March quarter of 2020 and summarised in a NI 43-101 compliant feasibility study soon after. The company has commenced a diamond core drilling program at ICO to supply metallurgical samples for test work to support the BFS update, and to infill drill the RAM deposit during initial years of envisaged mining operation.

ICO will initially produce and sell separate cobalt and copper concentrates as Jervois formed a view early in its due diligence of ICO that reversion to separate concentrates was commercially necessary in the absence of a US refinery. In comparison to the partially completed mine and mill, the refinery is at a preliminary level of study and technical certainty, and so cannot be realistically constructed within the same timeframe as mine to concentrate.

Jervois has commenced discussions with offtake partners for an initial period covering mine ramp up and stabilisation. Jervois will also commission a refinery engineering study to consider commercially proven technology to process concentrates, including third party feed through to refined cobalt and copper.

With the ICO BFS team now established, DRA and M3 will progress the engineering design for the process plant and infrastructure. In parallel, Jervois has commenced discussions with potential lenders and a data room is being prepared to facilitate due diligence. Upon project financing close and opening of the ICO mine portal and decline, Jervois expects a 12-month construction period with first saleable concentrate in the second half of 2021