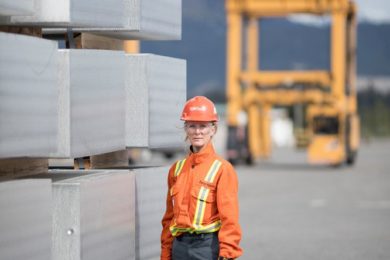 Rio Tinto says it is now offering independently certified “responsibly produced aluminium” from all of its Canada operations, with the extension of the Aluminium Stewardship Initiative’s (ASI) Chain of Custody certification to include the BC Works smelter and Kemano Power Operations in Kitimat, British Columbia.

The certification reinforces Rio Tinto’s commitment to responsible mining and metals production by providing independent verification that material can be traced through a ‘chain of custody’ spanning Rio Tinto’s Gove bauxite mine, in Australia, to its alumina refinery, aluminium smelters and casthouses in Quebec and British Columbia, Canada, it said.

Rio explained: “ASI certification means customers can be assured the aluminium purchased through Rio Tinto’s Canadian operations has been produced to the highest environmental, social and governance standards. Rio Tinto has led the establishment of responsible production certification for the aluminium industry as a founding member of the ASI, working alongside customers and a broad range of stakeholders.”

In 2018, Rio Tinto was the first company to receive the ASI’s first Performance Standard certification – the highest internationally recognised standard for robust environmental, social and governance practices – and Chain of Custody certification, covering five aluminium smelters, the Vaudreuil refinery, casting centres, port and railway facilities in Quebec, Canada. The BC Works smelter and Kemano Power Operations received certification against the Performance Standard in January 2019 and have now been included in the Chain of Custody certification. Rio Tinto is now working with the ASI on audits and certifications for other sites in its global aluminium business.

Rio Tinto Aluminium Vice President Sales and Marketing and ASI Board member, Tolga Egrilmezer, said: “This certification continues Rio Tinto’s leadership on responsible production. It increases the availability of ASI certified aluminium in a range of markets, giving customers the ability to offer end consumers products made with aluminium that meets the highest sustainability standards.”

ASI chief executive officer, Fiona Solomon, said: “This successful Chain of Custody certification demonstrates ASI’s potential to create impact through voluntary uptake of its program. We are seeing the positive upstream examples like this one now extending into downstream aluminium use sectors such as automotive, construction and packaging, and this is very encouraging.”

The ASI is a global, multi-stakeholder, non-profit standards setting and certification organisation. It works toward responsible production, sourcing and stewardship of aluminium following an entire value chain approach. ASI launched its Performance Standard and Chain of Custody Standard in December 2017. ASI’s 60+ members include leading civil society organisations, companies with activities in bauxite mining, alumina refining, aluminium smelting, semi-fabrication, product and component manufacturing, as well as consumer and commercial goods, including the automotive industry, construction and packaging, as well as industry associations and other supporters.