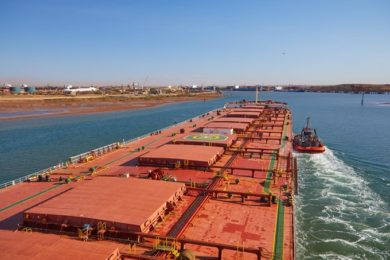 One of the world’s largest ports for iron ore exports, Port Hedland, in Western Australia, has had its  potential shipping capacity increased by 40 Mt/y.

The additional capacity, which was a result of Western Australia Government and industry investment at the port, will see Port Hedland’s potential shipping capacity go from 577 Mt/y to 617 Mt/y, a 6.9% increase.

Annual capacity allocations for each port user will remain the same, according to a media statement from Western Australia Ports Minister, Alannah MacTiernan. However, the increased capacity will allow all port users more capacity above their allocated tonnages by accessing D‑class shipping opportunities under the Port Hedland Vessel Movement Protocols.

Investments at the port to facilitate this new capacity modelling by the Pilbara Ports Authority included capital dredging, innovative marine technology and other port efficiencies, according to the statement.

This includes the recently completed three-year dredging works program, the Channel Risk and Optimisation Project. The A$120 million ($81 million) project included the removal of “high spots” in the channel, optimising navigable depths to allow deeper drafted vessels to safely navigate along the 42 km shipping channel.

Also driving this increase is the continued movement and facilitation of larger vessels in the channel. The sizes of ships coming into Port Hedland have increased significantly in recent years, with 45% of vessels now carrying more than 200,000 deadweight tonnage, compared with less than 10% in 2009, according to the Pilbara Ports Authority. Much of this increase can be put down to bigger vessels carrying iron ore from Port Hedland to Asia and elsewhere.