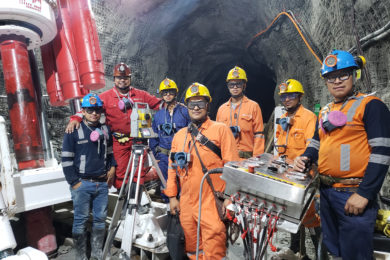 TERRATEC has celebrated the successful completion of a 300 m deep, 4.1 m diameter ventilation shaft at the Continental Gold-owned Buriticá gold project, in Colombia.

Peruvian mining contractor INCIMMET deployed a custom-built TR2000 Raise Boring Machine (RBM) to excavate the shaft in what TERRATEC said were challenging ground conditions. This put the machine through its paces during its first bore at the mine, the company said.

Located approximately two hours’ drive northwest of Medellin, Buriticá is a large high-grade gold deposit encompassing an area of about 75,000 ha in Antioquia. The mining complex, which is in the early stages of development, is Colombia’s first modern underground mine and was designated as a Project of National Strategic Interest by the Colombian government, in November 2015. When in production, it is expected to be Colombia’s largest gold mine, producing 253,000 oz/y of gold. First gold is expected by the end of the year, according to Continental.

TERRATEC said: “Arguably the biggest challenge for the mine development project is the area’s geology. Ground conditions at the Buriticá complex largely consist of andesite-porphyry, diorites and monzodiorites with intrusive hydrothermal gaps within the volcanic and sedimentary sequences. These mixed and fractured conditions provided a challenge both to the integrity of the reamer and the capability of this robust machine.”

Mineralised gaps, which are frequently associated with the development and alteration of clay minerals, required constant monitoring of the excavation and appropriate advance rates to provide good progress in this difficult terrain, according to the company.

“Not all raiseboring equipment is capable of working with such robustness in these conditions,” TERRATEC Regional Raiseboring Operations Manager, John Alejos, said. “Without doubt, this changing terrain is almost impossible to drill at such depths and such diameters. Only a team as strong as this, with the technical support of our on-site staff, is able to carry out such a task successfully and not without difficulties.”

Custom manufactured at TERRATEC’s workshop in Tasmania, Australia, the TR2000 RBM was designed for ease of operation and maintenance, while providing a high level of reliability. The unit is designed to “comfortably” execute raises of up to 500 m at 2.4 m diameter and larger ones up to 4.1 m diameter (of shorter depths), according to TERRATEC. It has a maximum pilot drilling torque of 42,000 Nm, a reaming torque of up to 209,000 Nm and breakout to 236,000 Nm. The maximum down thrust force is 665 kN with upthrust being 4,150 kN. The total installed power on the machine is 360 kW.

TERRATEC has numerous machines currently working in the Americas in Canada, USA, Mexico, Colombia, Peru and Argentina. These include the company’s entire range of vertical mining drilling equipment, including RBMs, Down-Reaming Machines and Box Holing Rigs, as well as a combination of these in the form of Universal Boring Machines.