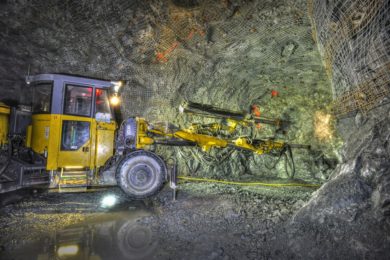 With production at the Lamaque gold mine, in Quebec, Canada, now in full swing, Eldorado Gold is looking at a potential expansion underground that could involve the use of battery-electric vehicles, or vertical haulage with conveyors, according to Chief Operating Officer Paul Skayman.

Speaking to IM last week, Skayman said the company, following the declaration of commercial production at Lamaque earlier this year, was in the process of working on a preliminary economic assessment (PEA) to expand Lamaque. This study will evaluate increasing throughput from an average of some 1,800 t/d to 2,500 tpd, with a resultant boost in annual average production to 170,000 oz, from close to 130,000 oz.

The expansion PEA is expected to be completed by the end of year and, subject to the results, a prefeasibility study on the expansion will begin, due for completion in the second half of 2020.

While the expansion is over a year away, Skayman said the deepening of the mine could see the company look at the potential for either battery-powered haulage or vertical haulage with conveyors. This would see the mine install a decline to access the orebody, as opposed to sinking a shaft.

Skayman said the provincial government offered incentives to employ such technologies at mine, while power was relatively inexpensive, “so, we are in the right place to be looking at this”. Indeed, Agnico Eagle Mines has employed a Rail-Veyor system at its Goldex mine in Quebec, while MacLean Engineering has delivered at least one battery-powered unit to an underground gold operation in the province.

Eldorado is not currently running any battery-powered units, instead, waiting for the technology to mature to a point where machines can run for a whole shift and the charging infrastructure has been proven, according to Skayman. He said the company was watching projects such as the recently opened Borden mine in Ontario to see where miners were pushing the “technology envelope” in the electrification arena.

Eldorado has other underground operations across the globe, but Skayman said Lamaque was the prime candidate for the use of battery-powered equipment.

“[This technology] is probably more likely to be used at Lamaque than our operations in Europe; Lamaque is a vertical stacked set of lenses and the deeper sections we know of go down to 1,500 m,” he said. “We’re nowhere near that in Turkey at Efemçukuru, which is relatively mature. We eventually get down to deeper sections at Olympias, but nothing like the depth at Lamaque.”