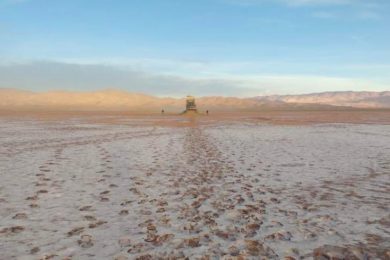 Lithium-focused AIS Resources says it has signed an option agreement with Ekos Research to invest $1 million in its SOLVEX solvent extraction process.

The SOLVEX process is the culmination of three years of research and development by Ekos Research, the University of Melbourne and the University of Tsinghua (China), according to AIS. This research has seen SOLVEX produce extraction rates exceed 99%, with greater than 99.2% purity lithium produced.

According to AIS, more than 90% of the solvents can be reclaimed using SOLVEX, while the process has 98.5% efficiency in removing major ions such as magnesium, calcium, potassium and boron.

Another potential benefit for AIS, which is currently exploring and developing lithium brine projects in northern Argentina (pictured), is the process looks to be “much more economic” than fractional crystallisation as no ponds are required. This could potentially reduce lithium processing investments by more than 60%, according to AIS.

“It is very efficient at handling high magnesium brines that pose a serious recovery problem using other technologies such as membranes, reverse osmosis, ion exchange and fractional crystallisation,” the company added.

The planned $1 million investment will go towards building a pilot plant in Melbourne that will be subsequently shipped to Salta, Argentina, where brines will be processed to demonstrate commercial viability, AIS said. This could see a pilot plant constructed nine months after the funding is received.