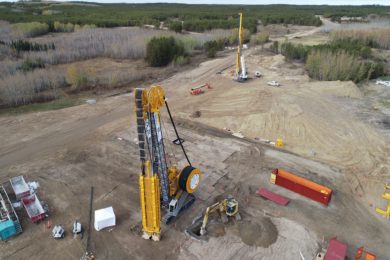 RTEC refers to Star Diamond’s mineral dispositions in the Fort à la Corne diamond district as Project FalCon. The ten holes completed on the Star Kimberlite included a total of 2,351 m of trench cutter drilling and intersected a total of 1,215.5 m of kimberlite. This kimberlite was pumped to surface and recovered using a Kimberlite Separation Unit (KSU), with samples loaded and stored in cubic metre bulk bags, which total 6,848 in number.

The Trench Cutter Sampling Rig consists of a Bauer BC 50 Cutter mounted on a Bauer MC 128 Duty-cycle Crane. The depth of each trench is determined by kimberlite thickness. Trench 19FALCT002 confirmed that the Trench Sampling Rig can reach its designed sampling depth of 250 m below surface. The KSU is designed to recover kimberlite fragments between 80 and 0.85 mm from the Trench Cutter Sampling Rig slurry. Kimberlite collected is being stored in a secure storage area, until the on-site Bulk Sample Plant (BSP) has been fully assembled and commissioned. Final diamond recovery will then be conducted by RTEC at a secure off-site facility.

George Read, states: “RTEC have successfully applied this new sampling technology and completed the trench cutter bulk sampling program on the Star Kimberlite. This ambitious sampling program required significant time to assemble all the components on site, but once it commenced the trench cutter has operated efficiently and successfully, recovering a large (estimated by RTEC to be approximately 8,271 wet tonnes) bulk sample from the Star Kimberlite. Simultaneous to conducting the trench cutter program, RTEC have been assembling the BSP, which is now at an advanced stage of construction.”

“Once construction is completed, RTEC intends to commission the BSP using existing Orion South kimberlite that was originally collected by the Corporation from the underground bulk sampling program performed in early 2009. The use of Orion South material for commissioning the BSP will help ensure that the BSP is operating at its design capacity before the commencement of the processing of the trench cutter samples that were collected from RTEC’s 2019 bulk sampling program. RTEC’s bulk sampling program using the Trench Cutter has been designed to recover high quality kimberlite samples and to help ensure that diamond breakage is minimised. “The successful use of this new Trench Cutter Sampling Rig technology for the recovery of kimberlite bulk samples also has the ability to revolutionise future bulk sampling and mining of kimberlites, particularly for kimberlites characteristic of the Fort à la Corne diamond district of central Saskatchewan, Canada.”