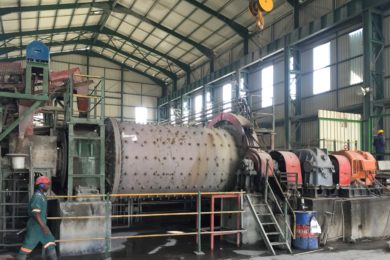 Caledonia Mining says it has successfully installed and commissioned a new oxygen plant at its 49%-owned Blanket gold mine in Zimbabwe.

Steve Curtis, Caledonia Chief Executive Officer, said the oxygen plant commissioning was the latest in a series of investments to increase production and improve operating efficiency at Blanket as it looks to reach 80,000 oz/y capacity by 2022. One of the other projects that will contribute to this increased output is the sinking of the Central Shaft, which was completed earlier this year.

Curtis said: “The new oxygen plant will provide up to 6 t of improved oxygen supply to the Blanket carbon-in-leach plant, which is expected to increase recoveries to approximately 94%.